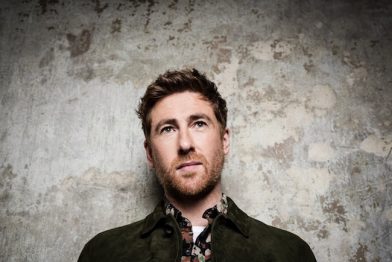 UK singer-songwriter, Jamie Lawson today announces the release of his new single, ‘Fall Into Me’ – out now via Gingerbread Man Records / Atlantic Records UK (live version HERE). Taken from his latest album Happy Accidents, Jamie releases the new track as well as being announced alongside Anne-Marie as the opener for Ed Sheeran’s huge 46-date UK and European summer stadium tour this year. Including four sold-out nights at London’s Wembley Stadium, the tour kicks off on 4th May in Cork.

On the news of him opening the tour, Jamie says; “It’s with continued respect and amazement that I see Ed Sheeran play to bigger and bigger audiences, it’s pretty remarkable what he’s achieving. I’m very excited that I get to be a part of that journey again by opening for him on his stadium tour in Ireland, UK and Europe. I’ll be bringing the band with me too which means I’ll get to play the new single ‘Fall Into Me’ in all its glory! I’ll see those of you with tickets very soon. I can’t wait.”

Fall Into Me, a song by Jamie Lawson on Spotify

In his armoury, Jamie Lawson holds an international hit single, a Number One album, an Ivor Novello Award, 238 million combined digital streams, 28 million YouTube views, and a huge social media following. In 2017, he had the chance to make an album in one of Los Angeles’ most legendary recording studios, with an equally legendary producer.

His latest album, Happy Accidents, is brimful with killer songs. It was produced by Joe Chiccarelli, who has previously worked with Rufus Wainwright, The Killers & The Strokes. Lawson recorded in LA’s Sunset Sounds, working with musicians handpicked by Chiccarelli, including keyboard player Roger Manning Jr (Beck) and drummer Matt Chamberlain (Tori Amos), who were joined by Jamie’s long standing bass player Henrik Irgens.

The songs on his debut self-titled album ‘showcased his skilled, attuned way with an irresistible melody and an empathetic lyric. Given a full international release via Ed Sheeran’s Gingerbread Man Records, lead single ‘Wasn’t Expecting That’ became a hit around the world, selling over a million copies worldwide. That success was further accelerated by a support slot with One Direction.

Jamie says, “When I couldn’t sleep after my dad died, I’d walk at two or three in the morning and sing to the river – anything that came into my head. It was a place I went for solace. And in many ways, me sticking at this as long as I have is partly due to my father – he knew me as a singer. But that’s how my dad knew me. So I think I kept at it, kept plugging away, because that’s my connection to him. And, you know,” he shrugs with a faint smile, “we eventually got through…”

It’s a lovely sentiment, and a lovely tribute, and they speak volumes of the kind of man – the kind of writer – that Jamie Lawson is.