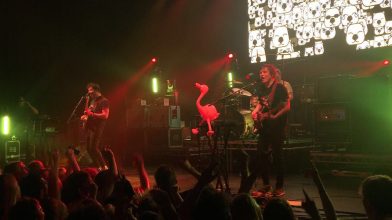 Last night bought a revelation of energy and quirky vibes to Norwich, LCR UEA. The Wombats impressed yet again. Selling out the venue in the first few days, their new album ‘Beautiful People Will Ruin Your Life’ bought joy and excitement to their audience.

The Wombats continue to assert themselves as the biggest Indie Pop band of our time. Supported by Bloxx and The Night Cafe; two captivating and energetic performances that left the crowds going wild… How could this possibly be topped? But the Wombats did it yet again. With their crazy aesthetics and flamboyant lighting, they shon through without a dull moment.

One of their greatest hits of the night was their new song ‘White Eyes’ which bounced off the audience sublimely. As soon as the first chord was played, the crowd knew what was coming and there was no holding back the goofy and careless dancing that followed next!

Another hit of the night was the tragicomic song ‘Kill The Director’ with the lyrics ‘This is no Bridget Jones’ being sung repeatedly by both the band and more dominantly, by the audience themselves.

The use of their scratchy, rapid strumming patterns and alternative chord progressions gave the night individuality and life. Noticeably, the bassist himself, Tord Øverland Knudsen had a quirky and amusing way of performing; using humorous facial expressions with rhythmic head banging. Chloe Eglington laughs, quoting ‘’I just can’t stop looking at him’’

The Wombats audience interaction was unstoppable and rather than being aggravated by the soaring objects being thrown about, they embraced it and stole the pink blow-up flamingo to improve their funky & quirky aesthetic.

Soaring between psychedelic elation and comical yet relatable lyricism, The Wombats continue to impress and I cannot wait to see what comes next!