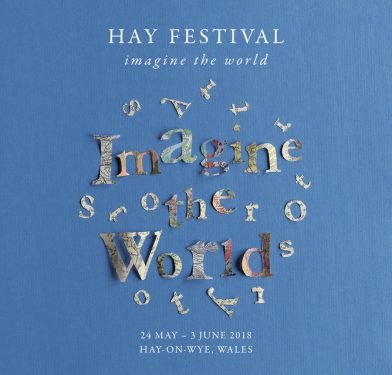 Hay Festival has today announced the programme for its 31st edition, taking place 24 May to 3 June in Hay-on-Wye, Wales.

Featuring over 600 of the world’s greatest writers, global policy makers, pioneers and innovators in 800 events across 11 days, the festival showcases the latest ideas in the arts, sciences and current affairs, alongside a rich schedule of music, comedy and entertainment for all ages.

A galaxy of literary stars launch new work, while the biggest ever HAYDAYS and #HAYYA programmes give young readers the opportunity to meet their heroes and get creative.

The Festival site is free to enter, with ticketed events in 10 tented venues, plus a range of areas to explore, including the Festival Bookshop; the HAYDAYS courtyard; the Hay Festival Wild Garden; creative workshops in the Make and Take Tent, the Scribblers Hut, The Cube and the Mess Tent; and market stalls, cafés and restaurants.

The Festival runs a wide programme of education work supporting coming generations of writers and culturally hungry audiences of all ages – Hay Festival Wales opens with two free Schools Days of programming, the Beacons Project gives students aged 16-18 the chance to learn from internationally acclaimed writers, students in tertiary education can get free tickets, and Hay Compass is a special space on site to learn and discover, with free access to inspiring speakers.

Hay on Earth looks at innovations in sustainability and the future of farming, with Secretary of State for Environment, Food and Rural Affairs Michael Gove and Google’s sustainability lead Kate Brandt.