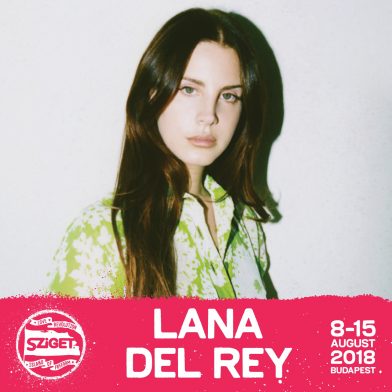 Sziget has today reveal that Lana Del Rey will be bringing some glamorously melancholic pop to the 26th edition of Sziget. She’ll be joining the likes of Arctic Monkeys, Dua Lipa, Gorillaz, Kendrick Lamar, Mumford & Sons, and Kygo who are all headlining this unforgettable festival.

Hosting some of the world’s biggest stars, Sziget has 50 stages, bringing together over 450,000 people and is tipped as the continent’s Glastonbury equivalent. Having won ‘Line-up of the Year’ in 2017, Sziget is back 8-15 August. Day tickets start at £65 with three, five and seven day tickets also available.

The ‘Lust for Life’ hitmaker, Lana Del Rey will be bringing her unique style of glamorous pop melancholia to Budapest’s Sziget Festival in August.

Recognised for her dreamy lyricism, tragic romance and ability to tap into historic pop culture, she’s come a long way from her New York roots. Her homemade music videos for ‘Video Games’ and ‘Blue Jeans’ went viral for their stylised cinematic qualities in the build up to her breakthrough album ‘Born to Die’, for which she won a Brit award. Her second album, ‘Paradise’ earned her two Grammy nominations.

Del Rey’s most recent accomplishments include collaborations with The Weeknd, A$AP Rocky and Stevie Nicks for her number-one album ‘Lust for Life’. Recently it was revealed that the pop icon was in the process of writing a musical and shared a dreamy rendition of Andrew Lloyd Webber’s ‘You Must Love Me’, originally performed by Madonna.

She is sure to exude retro sensibility with futuristic flair when she plays the sun-kissed island of Sziget this summer.

Sziget is one of the world’s largest music and arts festivals. It takes place on Budapest’s Óbudai-sziget, which is appropriately transformed into the ‘Island of Freedom’ every August. It welcomes ‘Szitizens’ from over 100 nations, of all backgrounds, in one place. Revellers will enjoy performances courtesy of some of today’s biggest artists, including hip-hop superstar Kendrick Lamar, and acclaimed DJ extraordinaire Kygo.

The celebrated festival won ‘Line-Up of the Year’ at the European Festival Awards 2017 after standing out among a group of festivals including Glastonbury, Rokslide and Lollapalooza, for a second year running in a category compiled by experts and voted for by the public.

One, three, five and seven day tickets for Sziget are on sale. Prices start at just £65. For more information and tickets, visit szigetfestival.com.