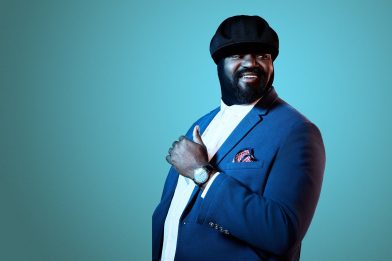 Gregory Porter soon returns to the UK to perform at the prestigious Royal Albert Hall. With additional dates added due to popular demand, Gregory will now appear on Monday 2 April, Wed 18 April and Thursday 19 April.

Gregory became the biggest selling jazz artist in the UK in 2017, following the success of ‘Nat King Cole & Me’ which landed No.3 on the Official UK Album Chart on release. It was his highest ever chart position and biggest-selling first week. ‘Nat King Cole & Me’ was also Gregory’s fastest streamed album to date, hitting one million streams three times faster than his previous album, ‘Take Me To The Alley’.

Commenting on the success of the album, Gregory stated: “I’m very grateful for the success of ‘Nat King Cole And Me’. This is a deeply personal project and a humble tribute to Nat’s incredible music. I can trace his influence back to when I was five or six years old, when Nat’s music filled a void in me when my father wasn’t in my life and wasn’t showing interest in me. Nat’s words were the life lessons, words of wisdom and fatherly advice I needed.”

‘Nat King Cole & Me’ is the follow-up to Gregory’s Grammy-winning albums ‘Liquid Spirit’ (2013) and ‘Take Me to the Alley’ (2016). ‘Liquid Spirit’ took Gregory from being the biggest name on the jazz scene to being one of the most sought-after singers around today, performing sell-out shows across the UK and being invited to perform on high profile TV programmes including The Graham Norton Show where he recently performed with movie legend Jeff Goldblum, as well as Strictly Come Dancing, Saturday Kitchen, The Andrew Marr Show and the BBC Music Awards. Gregory even launched his own TV series last year, BBC Four’s Gregory Porter’s Popular Voices, a three part series, which explored great vocalists throughout history.

He has become an adopted national treasure in the UK, visiting number 10 Downing Street, and singing for the Queenmultiple times, as well as major music festivals including Glastonbury, where he performed on the Pyramid Stage alongside the likes of Muse, Adele and Coldplay. Gregory’s ability to transcend genres even extends to his surprise dance hit ‘Liquid Spirit Claptone Remix’ which became one of the most popular tracks in Ibiza.

On his forthcoming performance at The Royal Albert Hall, where Gregory previously performed in 2016, Gregory stated, “It is an honour to return to The Royal Albert Hall to perform three nights in April. It is a truly special venue, with such a rich history and a beautiful sound. It’s hard not to feel regal when you perform there.”

WATCH THE ‘NAT KING COLE AND ME’ ALBUM TRAILER