Alex James’ The Big Feastival back for 7th year 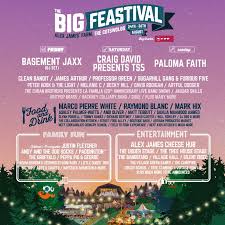 The Big Feastival, presented by NEFF, will make its much anticipated return to the Cotswolds this August Bank Holiday and has just announced its most stellar line-up to date.

With chart-topping music, Michelin star chefs, award-winning street food and a packed programme of family entertainment, the festival has something for everyone on this year’s menu.

With a double platinum selling album, two BRIT awards and a Grammy under their belts, The Big Feastival will get off to a barnstorming start thanks to none other than Basement Jaxx.

The electronic music duo will bring the party from Ibiza to the Cotsworlds, getting the crowd on their feet with their Friday night DJ Set.

The feel-good factor continues on Saturday with RnB sensation Craig David taking control of the stage. The singer-songwriter will be performing nostalgic classics and new hits which have seen a remarkable 15 top-10s across almost two decades.

The festival will come to an epic close with pop powerhouse Paloma Faith topping the bill with anthems from her new album, The Architect, on Sunday night.

The weekend will also feature X Factor 2012 winner James Arthur performing hits from his no.1 album Back from the Edge; electronic maestros Clean Bandit bringing the energy that only eight top-5 tunes can guarantee; and you can Read All About It with rapper Professor Green.

Also on the bill are DJs including David Rodigan MBE providing a selection of reggae dancehall music, bone fide superstar Jaguar Skills offering his unique mixes, and garage duo Artful Dodger offering a timely reminder of their role as chiefs of the underground.

Feastival veterans The Cuban Brothers will be adding their distinctive blend of music, comedy and dancing entertainment with their special 20th anniversary live show, La Familia.

On the food front, The Big Feastival will host two of the biggest powerhouses in the industry. Marco Pierre White, dubbed the godfather of modern cooking and the youngest chef to achieve three Michelin stars, will be sharing his culinary wisdom that launched the careers of notable chefs including Gordon Ramsay.

Joining him on the line up – one of Britain’s most respected chefs, Raymond Blanc OBE, a culinary icon who has shared his expertise to nurture some of the country’s best chefs today – some 34 of his protégés have gone on to win Michelin stars themselves.

The NEFF Big Kitchen will play host to top chefs and restaurateurs as they cook to an audience, share their knowledge and take part in live Q&A’s.

Glynn Purnell will be showcasing the bold and innovative cooking which has brought him a Michelin star.

Meanwhile, Mark Hix MBE will share the expertise which has seen him publish over 10 cookbooks on British cuisine.

The Big Feastival will bring family favourites straight from visitors’ most popular cooking programmes to the stage for live demonstrations as Matt Tebbutt and Andi Oliver join us on the farm.

Tommy Banks will highlight his Michelin star winning credentials while MasterChef winner 2017 Saliha Mahmood Ahmed will be showcasing the unusual flavour combinations and exciting dishes which won her the trophy.

Across the weekend, visitors can also enjoy cookery sessions with French baker Richard Bertinet, master of innovative Indian-inspired dishes Will Bowlby, as well as grill legends David Carter of Smokestak and DJ BBQ.