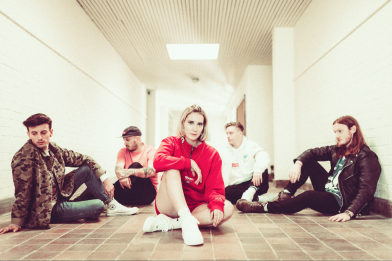 On March 16th, Fickle Friends will release ‘You Are Someone Else’ – their hotly anticipated debut album – to the world. Today, they share the album opener ‘Wake Me Up’ just as they prepare to head out on their massive UK tour next week.

Like the hugely popular singles that have preceded it, ‘Wake Me Up’ is a classic Fickle Friends shimmery pop anthem that kicks off a terrifically irresistible debut album. Over the last year it’s also become a pinnacle of their hugely popular live set too. Lyrically, it see’s frontwoman Natti Shiner play around with some of the themes that re-occur on the record – relationship paranoia and angsty obsession. On writing the track, Natti says – “‘Wake Me Up’ song is about wanting a relationship to work so bad but knowing deep down, it’s not going anywhere. It was the last song we wrote for the album”.

Listen to ‘Wake Me Up’ HERE

Wake Me Up, a song by Fickle Friends on Spotify

Fickle Friends have just embarked on their biggest UK tour to date. Despite having played now together over 350 times across the country, this time the band will extend their reach to play to some of the few cities in the country that they have yet to grace. From there, they will head b straight to Europe to do a run of dates in all the major cities and in May, they look to the USA. See full dates below.