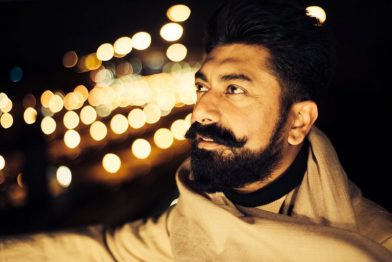 Norfolk & Norwich Festival has announced the full programme for its 2018 Festival (11 – 27 May). The programme, which spans performance, theatre, music, visual arts, literature, circus, outdoor and family events, includes world and UK premieres, one-off spectaculars, and a host of free events across the Festival.

The Festival will showcase renowned international artists from across the globe and countries as widespread as Syria, Australia and India, alongside the best local Norfolk and UK talent presented across the county, from Norwich city centre and Great Yarmouth to Wells-next-the-Sea.

Daniel Brine, Festival Director said: “The Festival is a wonderful time to celebrate our city and county, to bring communities together to experience great art and performance, and to welcome artists and visitors from across the UK and around the world. Our programme is broad and rich and we’re proud to be presenting world premieres alongside celebrated productions not previously seen in Norfolk. This year the Festival has been put together by all of our team. My predecessor, William Galinsky, laid the foundations with major commissions and partnerships and the team, along with our principal programming partners Britten Sinfonia, Serious and Writers’ Centre Norwich has given ﬂesh and life to the programme. I’ve joined as we put the finishing touches inplace and I have quickly immersed myself in the excitement and challenge of delivering one of the UK’s most dynamic arts festivals.”

World premieres include: Mercury Music Prize winner and pioneer of Asian Underground musicTalvin Singh at Norwich Cathedral; Norwich, Ely and Peterborough Cathedral Choirs combining for a concert to perform the premiere of BBC Young Composer Of The Year Alex Woolf’s new piece; a durational choral piece from The Voice Project; Kathryn Tickell & The Darkening bring the oldest Northumbrian folk songs to life again; the internationally acclaimed circus company, Barely Methodical Troupe headline the Adnams Spiegeltent with Shift; Improbable present The Paper Man, inspired by the unexplained death of Austrian football star Matthias Sindelar in 1939, who humiliated the Nazi regime by refusing to throw a match; Wayfaring, a large-scale artwork based around the ancient routes of the Icknield Way in Area of Outstanding Natural Beauty Wells Beach.The Isle of Brimsker, a new multi-sensory story from specialists in making theatre for audiences with Profound and Multiple Learning Disabilities Frozen Light; a magical cycle-powered ride-on carousel The Bewonderment Machine by A Bird in the Hand Theatre; Mirror Mirror by Mind The Gap, one of Europe’s leading learning disability theatre companies; Belly of the Whale, the first outdoor show by critically acclaimed Ockham’s Razor and steampunk inspired The Playground of Illusions by Travelling Light Circus.

The 2018 Festival will see multiple world premieres in performance.

Improbable will present the world premiere of The Paper Man, exploring what we do when fascism comes to town and inspired by the unexplained death of Austrian football star Matthias Sindelar in 1939, who humiliated the Nazi regime by refusing to throw a match. The production follows middle-aged, white British, Football addict-in-recovery and Improbable co-founder, Lee Simpson in his search for answers.

The internationally acclaimed UK circus company, Barely Methodical Troupe headline the Adnams Spiegeltent with the world premiere of Shift following their previous hits Bromance and Kin. The company have been garnering acclaim since their first show toured for over 18 months worldwide drawing on the company’s background in circus, dance and parkour.

The Isle of Brimsker presented by Frozen Light is a new multi-sensory story from specialists in making theatre for audiences with Profound and Multiple Learning Disabilities about a lighthouse keeper and a runaway.

Provisional Figures is a new piece of theatre from award-winning Portuguese film and theatre director Marco Martins, inspired by the 10,000 Portuguese immigrants arriving in Great Yarmouth in the mid-2000s. Presented in Great Yarmouth the show will be accompanied by a celebration of Portuguese culture, food and drink.

In England’s first UNESCO City of Literature, Norfolk & Norwich Festival and the Writers’ Centre Norwich will once again present a world-class literature programme, including the City of Literature Weekend, taking place over three full days.

The 2018 literature line-up includes writers such as punk musician Viv Albertine; Caspar Henderson on natural history and neuroscience, Sarah Perry and special guests marking an important year for women in writing – 80 years of Rebecca, the 100th birthday of Muriel Spark and the 200th anniversary of Frankenstein, Hilary Spurling will discuss her long awaited portrait of Anthony Powell, Rachel Hewitt will speak on the history of emotional thinking, Fred Pearce on humanity’s nuclear history, Hugh Lupton tells the story of making his new novel The Mabinogion, TED speaker and author of New York Times bestseller Chasing the Scream Johann Hari on his new book Lost Connections, Professor of Psychology Charles Fernyhough and Professor of Disability Research Tom Shakespeare will discuss how books help us understand diversity andCaitlin Davies’ talks about her exploration of real-life stories of women prisoners, Bad Girls. During the Festival there will be 5×15 on the mysteries of human brains and bodies, a Writes Back! mini-series covering Autism, disability and D/deafness, a community takeover of the Council Chamber in city hall to debate wellbeing, environment and integrations with Ben Okri and a live telling of Preti Taneja’s deeply-moving and award-winning novella Kumkum Malhorta set in New Delhi, in the grounds of Norwich Castle.

The Festival’s classical music programme is co-curated for the second time this year by Britten Sinfonia who return with Thomas Adès, following their sell-out performance of Beethoven’s Symphonies 1 and 2 in 2017, to continue their journey with Symphonies No 4 and 5 alongside the music of Gerald Barry featuring Nicolas Hodges, as well as presenting their Alice Through the Looking Glass as part of the family programme. Other highlights in the programme include Robert Trevino conducting the London Philharmonic Orchestra in a programme of Mahler and Rachmaninov with pianist Arseny Tarasevich-Nikolaev, Norwich, Ely and Peterborough Cathedral Choirs combining for a concert to perform the premiere of BBC Young Composer Of The Year Alex Woolf’s new piece, The Sixteen’s return to the Festival with a programme spanning 500 years of British choral music, The Trout Quintet (Hyeyoon Park, Brett Dean, Kian Soltani, Leon Bosch andBenjamin Grosvenor) with a special concert, singers Mark Padmore and Christopher Purves, joined by Simon Russell-Beale for a programme of music and poetry in Songs of the Sea and the continuation of the partnership with BBC Radio 3’s New Generation Artists, giving audiences the opportunity to hear some of the most promising new talent from around the world with concerts from Ashley Riches, Mariam Batsashvili, Aleksey Semenenko and Andrei Ionita.

The Free Outdoor Programme at the Festival brings world-class performances from across Europe to Norwich’s parks and open spaces completely free of charge.

Other programme highlights this year includes Marco Barotti’s robotic woodpeckers popping up across the city and transforming mobile signals into beats tapped out onto the city’s architecture and Wayfaring, a large scale world premiere from And Now: inspired by the ancient routes of the Icknield Way, taking place on Wells Beach with illumination, music and performance in a huge free celebration.

The Garden Party will also return to the Festival for the middle weekend with breath-taking circus, intriguing illusions, life-like puppets and strange beings from outer space. Norfolk & Norwich Festival is thrilled to be continuing its membership of the Creative Europe In Situ network and the UK-based Without Walls, bringing to the festival the very best outdoor work from the UK and all over Europe. Both networks are supporting NNF’s own commissions.

Alongside multiple events for families in the Free Outdoor Programme, Britten Sinfonia will presentAlice through the Looking Glass and Kid Carpet and the Noisy Animals will take younger audiences on a silly and lively journey about going on holiday. Plus there are free storytelling, dancing and music events for Early Years in the Spiegeltent.

The flagship arts organisation for the East of England, Norfolk & Norwich Festival showcases some of the world’s most renowned international artists alongside regional talent, drawing audiences from across the UK.

Norfolk & Norwich is dedicated to making Festival events accessible for all. There are a variety of initiatives in place to enable as many people as possible to enjoy the work.

Full information on Norfolk & Norwich Festival and all events at www.nnfestival.org.uk.