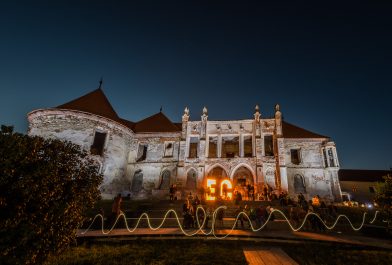 Electric Castle returns this summer for its sixth edition as Europe’s most spectacularly located festival, Boasting an unbelievable multi-genre line-up of renowned artists across seven stages, Electric Castle have announced stunning vocalist and chart-topping Jessie J. From 18th-22nd July 2018, the fifteenth century Transylvanian castle will welcome a who’s who of talent from across the music industry which includes newly announced performances from Groove Armada, Mura Masa, Nothing But Thieves as well as anticipated sets from Richie Hawtin, Romare and many more.

A tech park filled with the latest in VR and gaming as well as an impressive yoga, film and food offering adds to the daytime activities across the festival.

Vocal powerhouse Jessie J is set to ignite the stage with a raw and empowering set filled with pop anthems from her chart smashing back catalogue, including the likes of ‘Domino’, ‘Price Tag’ and ‘Do It Like a Dude’, as well as the promise of brand new work from ‘R.O.S.E.’, the pop icon’s eagerly anticipated 2018 come back album.

Globe dominating Groove Armada join for fantastical party experience elrow as well as multi-instrumentalist, producer and A-List collaborator Mura Masa, bringing tropical house anthems and ultimate summer pop vibes to the festival as well as alternative Indie rockers Nothing But Thieves. Then arrives the return of Parisian nu-jazz specialist St. Germain plus Hamburg electronic veterans Digitalism, it’s not one to be missed.

Godfather of minimal house, Richie Hawtin, will administer a liberal dose of full-blooded techno sound to the festival accompanied with the usual audiovisual spectacle his fans have become accustomed to, whilst Excision promises an equally visually impressive, crowd shaking set for bass veterans.