Having just announced their brand new location at West London’s Gunnersbury Park, Lovebox are thrilled to share their massive 2018 line-up.

With headline sets from the Grammy-winning Childish Gambino on the Saturday, and grime icon Skepta on the Friday, plus appearances from N.E.R.D, SZA, Anderson .Paak & The Free Nationals, Vince Staples, Mura Masa, The Internet and Kali Uchis.

On Saturday, another trailblazing solo artist tops the billing. Lovebox are delighted to welcome Childish Gambino to the Main Stage Childish – AKA Donald Glover – is the definition of multi-talented, juggling the roles of rapper, singer, songwriter, producer, actor, comedian and director with ease.

His most recent album, the soul-tinged, funk-leaning Awaken, My Love! which has seen Gambino ascend to even greater heights, securing a whopping five Grammy nominations, going on to win the gong Best Traditional R&B Performance for the omnipresent standout track Redbone.

Friday’s headliner Skepta is one of UK music’s most prominent figures, and a trailblazer of the grime scene.

In 2014 his single ‘That’s Not Me’,  became a breakout hit, laying the foundations for a slew of massive singles and eventually his critically-acclaimed fourth album Konnichiwa, which won the 2016 Mercury Music prize.

The energy continues throughout the billing. Lovebox are thrilled to have the enigmatic, genre-hopping experimentalists N.E.R.D – AKA Pharrell Williams, Chad Hugo and Shae Haley, take to the stage to co-headline the Saturday in the wake of their explosive comeback.

SZA had an incredible 2017. Her debut album Ctrl was a breakout moment for the TDE-signed R&B star, garnering critical acclaim and securing four Grammy nominations.

Anything super-producer Diplo touches turns to gold, and his energetic sets only serve to reflect his impressive back catalogue.

Meanwhile, Annie Mac will be coming along for the ride to Gunnersbury Park for her annual slaying of the Main Stage.

Some of the biggest names in dance will be at Lovebox, from celebrated producer Jon Hopkins (DJ) to the legendary Loco Dice via unconventional house hero Green Velvet.

Finally, there’s some of the finest DJs in the UK in the form of Andrew Hill, Saoirse, Jane Fitz and Cici. All have quietly played a part in shaping the sound of the dancefloors we know and love today.

Artists will be playing across a carnival of stages hosted by Noisey, Jackmaster & Numbers present Mastermix,Mike Skinner and Murkage present Tonga, Shy FX presents CULT.URE, Corona SunSets and Kopparberg Outsider all hosting their own line-ups, to be announced later this year.

This is just the first wave of artists for Lovebox – with even more acts to be announced, it’s set to be another banner year for London’s most-loved festival. 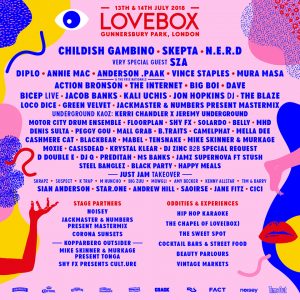