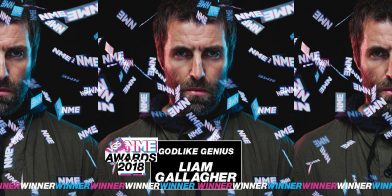 Other big winners on the night include Mercury-Prize winning band Alt-J, who took to the stage with an incredible performance of their latest single ‘In Cold Blood’ before taking home the highly-coveted accolade of ‘Best British Band’ supported by Zig-Zag.

This year’s Godlike Genius, Liam Gallagher was presented the legendary award by Skepta before closing the evening with an epic performance, including ‘What’s the Story? (Morning Glory)’ ‘Rock n’ Roll Star’, ‘Wall of Glass’, ‘Greedy Soul’ and ‘Cigarettes and Alcohol’.

Other performances in the ceremony included Stefflon Don and Skepta, who wowed the audience with an unforgettable, stage-stomping performance of their single ‘Ding-A-Ling’. Skepta later took the stage once more to accept the rare NME Innovation Award on behalf of his label and creative collective, Boy Better Know.

The prestigious ‘Best Album’ supported by Orange Amplification was presented by international supermodel Naomi Campbell and went to J Hus and his critically-acclaimed 2017 debut ‘Common Sense’.

As always the VO5 NME Awards celebrated and recognised some of the most memorable music moments of the past year, with this year’s ceremony including an emotive tribute to the late Mark E Smith, led by Brix Smith Start. Hero Award winner Ariana Grande’s One Love Manchester concert was recognised as Music Moment of the Year, after raising more than £10 million in donations for the British Red Cross after the tragic bombing after her concert at Manchester Arena. Although Ariana and her team could not attend the ceremony to accept the award, they passed on the following message: “I really appreciate everyone who has voted tonight, but I’d like to dedicate this award to the real heroes – the people of Manchester, the brave young men and women who stand together”.

Famed for their hugely ambitious live productions which redefined the festival experience, Musecollected the award for ‘Best Festival Headliner’ supported by Anna Valley, presented to them byFaris Badwan from The Horrors.

Speaking of this year’s VO5 NME Awards ceremony, Mike Williams said: “Blimey, what a night. Liam Gallagher proved he’s the ultimate Godlike Genius and inspired some amazing rock’n’roll moments in the room, Shirley Manson and Boy Better Know got the recognition their amazing achievements deserve, and the list of winners was like a who’s who of the most relevant and exciting artists in the world today. After such a huge year for NME where once again our audience is bigger than it’s ever been in our history, it’s great to give everyone such a brilliant night to remember (hangovers notwithstanding…)”

The full list of VO5 NME Award winners is as follows:

Craig David & Bastille – ‘I Know You’

Under The Radar Award supported by HMV

Music Moment of the Year

Hero of the Year

Villain of the Year