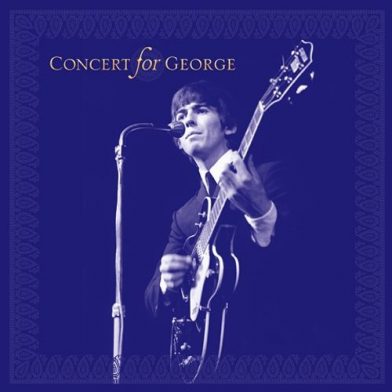 In honor of George Harrison’s 75th birthday (February 25), the Grammy winning, 8-times platinum release CONCERT FOR GEORGE, will be available for the first time on vinyl, released as a 4-LP Box Set, as well as a Limited Edition Deluxe 10-disc Box Set via Concord Music.
The Deluxe Box Set (limited to 1,000 pieces worldwide) features the complete sound and film recordings from the concert, a 12”x12” hard-bound 60-page book, plus an opportunity to own a piece of the historic event, by way of a cutting from the original hand-painted on-stage tapestry used as the backdrop at the Royal Albert Hall on November 29, 2002.

And includes a note from Olivia Harrison, explaining the story behind the tapestry.
​

February 25th marks what would have been George’s 75th birthday. In love and remembrance, CONCERT FOR GEORGE will be reissued on February 23rd 2018, as a Deluxe Edition Box Set, a 4-LP Box Set, plus new CD/DVD and CD/Blu-ray combo packages.

On November 29, 2002, one year after the passing of George Harrison, Olivia Harrison and longtime friend Eric Clapton organized a performance tribute in his honor.

CONCERT FOR GEORGE captures stunning renditions of some of the most significant music of the 20th century, including “While My Guitar Gently Weeps” (featuring Clapton on guitar, McCartney on piano and Starr on drums), “Taxman” (performed by Tom Petty and the Heartbreakers) and “The Inner Light” (covered by Jeff Lynne and Anoushka Shankar).

Lynne, Harrison’s longtime friend and collaborator, produced the audio elements of the concert, while Clapton oversaw the entire proceedings as Musical Director.

The 4-LP Box Set includes the complete sound recordings from CONCERT FOR GEORGE, on 180-gram audiophile vinyl, featuring a special, mandala-design etched on side-8.

This is the first time that all songs from the performance have been available on an audio configuration.

The album will also be made newly available via streaming platforms, track listing mirroring that of the vinyl. In addition to the vinyl formats, the release will also be presented as a 2-CD set.

The 2-disc DVD and Blu-ray sets also include the complete filmed concert on the first disc, with a second disc containing the original theatrical version featuring concert highlights, interviews with the performers, rehearsals and behind-the-scenes footage.