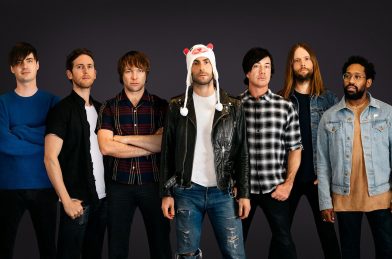 “Wait” is the second single off of Maroon 5’s sixth studio album, Red Pill Blues. Executive produced by J. Kash and Adam Levine, it features special guest appearances by SZA, Julia Michaels, A$AP Rocky and LunchMoney Lewis. The album release included a comprehensive marketing partnership with Snapchat, that included Snapchat Lens-themed album artwork and a custom Snapchat Lens for the single “What Lovers Do,” which was viewed by Snapchatters over 2 billion times.

The album was released through an exclusive marketing partnership with Snapchat, which received over 2 billionimpressions in its release month. “Wait” is the latest addition to a series of hit tracks Maroon 5 have debuted recently. In August, the band delivered the irresistible single “What Lovers Do” featuring Top Dawg Entertainment artist SZA, making for a collaboration that uniquely merges their signature style with SZA’s seductive delivery. The track accumulated over 385 million Spotify streams and 197 million YouTube/VEVO views. The band also delivered the hypnotic single “Cold” featuring Future, which amassed over 284 million Spotify streams and 119 million YouTube/VEVO views. The release of “Cold” followed the group’s massive hit single “Don’t Wanna Know,” featuring Kendrick Lamar, which hit the Top 10 in fifteen countriesand nearly 370 million YouTube/VEVO views.

In conjunction with the new album, Maroon 5 also recently announced their Red Pill Blues world tour produced by Live Nation. The first leg of dates are set to kick off on May 30th at the Tacoma Dome in Tacoma, WA and will feature special guest Julia Michaels. Tickets are on sale now. Please see below for routing and click HERE to purchase tickets.