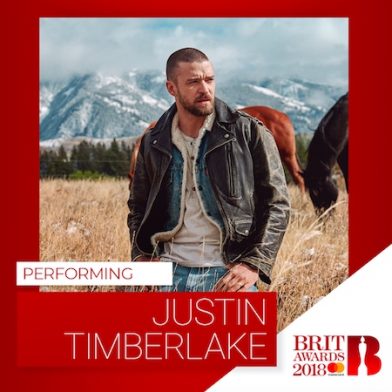 The BRIT Awards 2018 with Mastercard today announce that multi-million selling superstar and three-time BRIT winner Justin Timberlake will perform live on the show on Wednesday 21st February at The O2 Arena, London.

Justin Timberlake is one of the most successful international male solo artists in the world with all three of his previous albums (Justified, FutureSex/LoveSounds and The 20/20 Experience) going to No.1 in the UK as well as receiving many platinum and multi-platinum certifications worldwide.

A multi-talented musician and actor, Justin Timberlake has sold over 32 million albums worldwide, sold out arenas all across the globe, received numerous awards and nominations, all which have helped him to become one of the most highly respected entertainers in the world today. He also recently unveiled details of his highly anticipated fourth studio album ‘Man of the Woods’ which is set for release February 2nd on RCA Records.

Joining the previously announced Rita Ora, Rag’n’Bone Man, Jorja Smith, Ed Sheeran, Stormzy, Dua Lipa, Foo Fighters and Sam Smith, Timberlake will take to the BRITs stage for the third time. Previous performances include his No.1 single ‘Mirrors’ in 2013 and a show stopping three-song medley performance at the BRITs 2003 with ‘Cry Me A River’, ‘Like I Love You’ and a duet with Kylie Minogue for a cover of Blondie’s ‘Rapture’.

With three BRIT Awards under his belt – International Male Solo Artist in 2004 and 2007, and Best International Album in 2004, his performance at this year’s BRITs is not only expected to be a BRITs night highlight but also a stand out global TV moment.