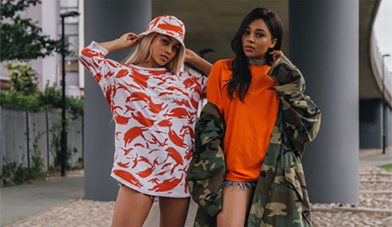 Hailing from south-east London, BLESSED – made-up of sisters Lauren and Georgia Morgan – is the exciting new duo currently causing a storm on the music scene as they continue to unleash their addictive and one-of-a-kind fusion of R&B, dancehall, electronic and pop influenced sounds.

Following the recent release of their last track ‘Pride’ and its iconic 90s and 00s girl bands inspired visual which was premiered on Hunger, BLESSED return with their new EP ‘Howlin’ (out now on Island Records).  In addition to its title track and recent release Pride’, the EP also features ‘Fire It Up, their instantly addictive previously unheard track, and a show-stopping, stripped version of their single ‘See Through All The Colours’.

Pride by Blessed on VEVO.

Speaking on the new EP, BLESSED said: “We are so excited to be releasing this EP. We feel we are growing with our music and sound and this little body of work really reflects this for us.

‘Fire it up’ is that feeling where you want the person you’re with to be more assertive, take the lead but also to loosen up with you and have fun. This was actually one of the first songs we ever wrote together, so it’s our little baby we’ve been dying to release.

We love the acoustic version of ‘See Through All The Colours’ as it shows a vulnerable and rawer side to the song in comparison to the heavier dance based original. Being able to do this has given us a new love for this song.”

The new EP sees BLESSED continuing to demonstrate their flair for crafting hypnotic sonics with killer melodies and sharp lyricism and follows the release of their debut EP ‘See Through All The Colours’ which along with its seductive title track also featured their previous release ‘My Yute’ and debut track ‘Venom’.

Recently signed to the iconic Island Records hot on the heels of the buzz they have been bringing to the scene, BLESSED have steadily been building some serious heat and earning rave reviews from titles such as i-D, Wonderland and Clash and had Popjustice urging everyone to ‘keep your eyes on this pair’ whilst SBTV described the duo as ‘definitely blessed’.

Earlier this year, the duo released their debut track, the soulful and haunting ‘Venom’ which swiftly caught the attention of outlets such as Notion, Press Play OK and Very Introspective and along with their show-stopping covers of tracks by the likes of Cashmere Cat, Luis Fonsi & Daddy Yankee and DJ Khaled offered a glimpse of the credentials which will no doubt see BLESSED as the ultimate ‘ones to watch’ act for 2018 and the name set to firmly be on everyone’s lips!