Shawn Mendes releases new single ‘There’s Nothing Holdin’ Me Back’ 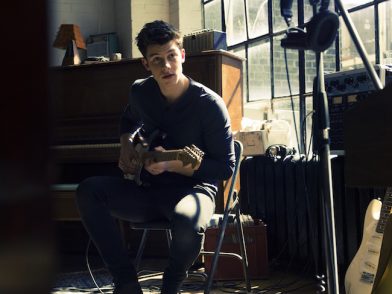 Today, on the brink of kicking off his arena headlining Illuminate World Tour, multi-platinum singer/songwriter Shawn Mendes releases brand-new single “There’s Nothing Holdin’ Me Back.”

Shawn revealed to US publication, Billboard, “The minute I wrote this song I knew I wanted to get it out before my tour started, to give fans something new and fresh in addition to everything from Illuminate. I can’t wait to perform it on the tour, and for everyone to hear it.” The single was written by Shawn in collaboration with Scott Harris, Teddy Geiger and Geoff Warburton, and produced by Teddy Geiger. Listen to “There’s Nothing Holdin’ Me Back” here:

https://IslandRecs.lnk.to/HoldinMeBack
Shawn’s first-ever headlining arena world tour kicks off next Thursday, 27th April at Glasgow’s SSE Hydro followed by a performance on 28th April at Manchester Arena before continuing across Europe. The massive tour spanning 61 dates across 24 countries will then see Shawn perform two consecutive nights in London at The O2 on 1st and 2nd June. The North American leg of the Illuminate World Tour will start 6th July in Portland, OR, running through 23rd August in Boston, MA, and will include shows at Los Angeles’ renowned STAPLES center on 12th July as well as Brooklyn’s iconic Barclays Center on 16th August (see below for full list of tour dates).

Shawn is touring in support of his second album Illuminate (Virgin EMI Records), which
became an instant Top 3 smash in the UK Official Charts upon release. The multi-platinum artist’s second offering features the global hit ‘Treat You Better’ which catapulted to the #1 in 40 countries, has amassed over a whopping 700 million views on YouTube and quickly became his second Top 10 hit in the UK Official Charts since releasing the #1 single ‘Stitches,’ and the latest single ‘Mercy’ In just a year, Shawn has sold over 2 million singles in the UK alone, of which ‘Treat You Better’ and ‘Stitches’ finished in the Officials Charts’ ‘Top 40 Official Biggest Songs of 2016’ chart, and ‘Mercy’ recently became certified Gold.

More recently, Shawn has been nominated for three Billboard Music Awards, including Top Artist, Top Male Artist and Top Social Artist. To top things off, Shawn was also announced to perform at Radio 1’s Big Weekend this year on Sunday 28th May on the Main Stage.