Grammy-nominated Americana stars The Lumineers today announce the release of ‘Seeds’, an exclusive 10” vinyl set to be released in conjunction with Record Store Day.

The limited edition release from the critically-lauded Denver-based outfit shows the progression of two of the most popular tracks from their No.1 sophomore album ‘Cleopatra’ (‘Angela’ and ‘Long Way From Home’) from initial demo, through recording to the live entity.

‘Angela’ is a subtle and restrained classic folk-rock song, which could have come straight out of Laurel Canyon in the late 60s-70s. It builds and crescendos seemingly lost in the vault of classic songwriting reappearing in 2017 as ageless and compelling.

‘Seeds’ will be released on Record Store Day on Saturday 22nd April and you can find it at your local (participating) record store.

The Lumineers are currently in the midst of an extensive North American arena tour in support of last year’s #1 album ‘Cleopatra’.

The band’s current live plot on The Cleopatra World tour has seen them play to adoring fans all over, including two sold out nights at the legendary Madison Square Garden.

The band will return to London this summer with an appearance at Hyde Park’s British Summer Time Series (appearing alongside similarly-revered songwriters Stevie Nicksand Tom Petty and the Heartbreakers).

Following that The Lumineers hit the road and will perform in stadiums opening up 13 shows with U2. 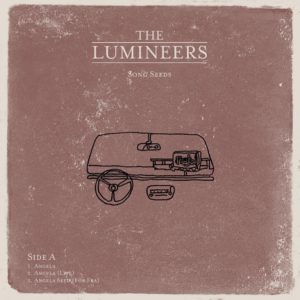