Rising alt-pop/hip-hop artist K.Flay has today released her brand new single, ‘High Enough’, taken from her highly-anticipated second album ‘Every Where Is Some Where’ out April  7th.

Get K.Flay’s new album, ‘Every Where Is Some Where,’ out now: http://smarturl.it/EWISWK.Flay – High Enough available now for download and streaming.iTunes: …

Ahead of the new album, excitement continues to build worldwide with previous single ‘Black Wave’ featuring on New Music Friday across the globe and saw K.Flay perform the track live on Conan to millions of viewers across the US.

Every Where Is Some Where features production from some of pop music’s heaviest hitters, including Mike Elizondo (Regina Spektor & Twenty One Pilots) and Tommy English (Ladyhawke), amping up the album’s defiant spirit with a densely textured yet gritty sound.

Having toured the UK in 2015 with PVRIS, K.Flay returned last summer to play at Reading & Leeds Festivals, Bestival, and also her own sold-out headline show in London at the Hoxton Bar & Kitchen. She also continues to tour across the US and Canada, where she has been selling out countless shows. 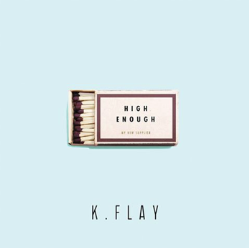