Bearded bohemian Father John Misty’s rise to fame is a story of dedication and delivery: with wit and grit, he has penned songs that are powerful on record and even better live.

He conquered Roskilde Festival in 2015 and returns as an even more accomplished songwriter with his new album ‘Pure Comedy’.

The flamboyant songwriter will take on the festival’s iconic Orange Stage for the first time, more politically charged than ever before.

Foo Fighters, The Weeknd, Arcade Fire, Solange, Lorde, Trentemøller, A Tribe Called Quest, G-Eazy, Moderat/Modeselektor (playing together for the first time ever), Blink-182 and Justice are among the acts already confirmed for Roskilde Festival 2017.

A total of 94 acts have now been announced. The full line-up will be revealed in April with 80 new acts. The festival will take place from Saturday 24 June to Saturday 1 July 2017. 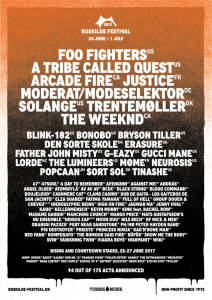