Robbie Williams has revealed the video for his new single, ‘Mixed Signals’, taken from his Number 1 platinum-selling album, ‘The Heavy Entertainment Show’.

The video features Robbie convinced that his on-screen lover is having an affair and follows her seemingly getting ready for a date.

The single was written by Brandon Flowers, and features all members of The Killers who play on the record. The track was produced by 3-time Grammy Award winner Stuart Price.

Robbie will embark on a European stadium tour later this year, playing thirty one shows in nineteen countries. The tour opens in the UK at Manchester’s Etihad Stadium on June 2nd, the UK leg of the tour will close at the London Stadium (Queen Elizabeth Olympic Park) on June 23rd. Erasure will be joining Robbie Williams on the tour as special guests. 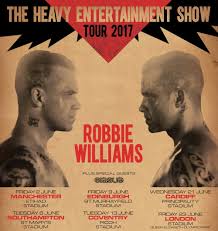