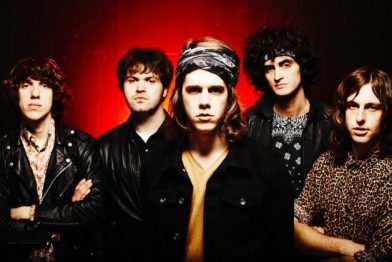 Hotly tipped Bristol newcomers The Shimmer Band come flying out of the traps into 2017 with their unequivocally potent new single ‘Jacknife And The Death Call’, out on January 20th.

THE SHIMMER BAND – JACKNIFE AND THE DEATH CALL

The new single by THE SHIMMER BAND. A POC Film production. DOP Sam Morgan More from Framedogs. Out now on KOMPLEX RECORDINGS (KMPLX005) https://itunes.apple.com/gb/album/jacknife-death-call-single/id1195946308 THE SHIMMER BAND DJS TONIGHT 20:01:17 AT THE EXCHANGE CLUB, BRISTOL. 11PM. THE SHIMMER BAND ON TOUR WITH CABBAGE AND APRIL FEBRUARY 2017.

With support under their belts from the likes of BBC 6 Music, Huw Stevens, Clash, Music Week, Gigwise, and the unparalleled new music champions This Feeling, The Shimmer Band are heading for the ionosphere this year.

The band follow up last year’s massive autumn UK headline tour with the main support slot for fellow explosive trailblazers Cabbage on their live dates in February, including what will be an unforgettable night at The Lexington on February 2nd.

The Shimmer Band support Cabbage on tour for the following dates: