The blue touch paper has been lit for the party of the decade – the 10th anniversary of the award-winning Sound City – the UK’s largest city based festival.

Having already announced a move to the larger Clarence Dock for 2017, Sound City has also revealed that it will host four days of festivities to mark its special birthday.

The festival launches on Thursday 25th May with a celebration of the English avant-garde featuring a trio of some of the most influential bands of the modern era – The Human League, Art of Noise and A Certain Ratio.

Global music legend John Cale takes the stage on Friday with the only European performance of The Velvet Underground & Nico. Initially announced as a stand alone show this 50th celebration of one of the most important albums of all time has now been brought into Sound City and a limited number of additional tickets have been released. With a host of live collaborators still to be announced the show is surely going to be one of the most culturally significant happenings of the year. 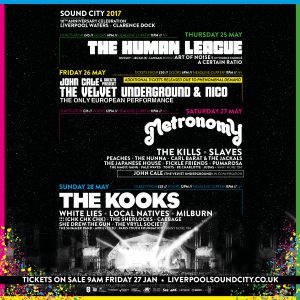