I’m A Celebrity: Scarlett could be the most popular contestant ever

I’m A Celebrity…Get Me Out Of Here! is back which can mean only one thing… the time has come for a brand new cast of celebrities to head down under and battle it out in TV’s toughest entertainment challenge.
Leaving their plush pads and luxuries far behind, our celebrity campers will spend up to three weeks taking on the harsh surroundings of the Australian Jungle, with a whole host of brand new nasty surprises created just for them.

The fearless celebrities entering the terrifying and legendary jungle camp will ﬁnd themselves cut oﬀ from the outside world and praying the public doesn’t send them straight into a dreaded Bushtucker Trial.

As always, our BAFTA award-winning hosts Ant and Dec are back to present all the big stories live from the Jungle every night.

Scarlett Moffatt has attracted 34% of all bets at William Hill to win this year’s I’m A Celebrity – an almost unprecedented level of support before a show has even started. She is 6/4 clear favourite to be crowned ‘Queen of the Jungle’  ahead of 6/1 second favourite Sam Quek and 8/1 shot Joel Dommett.

“The bets keep flooding in for Scarlett and it would not be a surprise to see her odds on before the show starts on Sunday,” said William Hill spokesman Joe Crilly. “The removal of Danny Baker from the betting has seen her odds shorten as he was the 9/2 second favourite.” 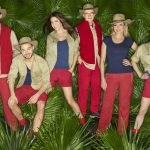