It’s the time of year that everyone has been waiting for – forget Halloween, put your excitement about the release of Girl on the Train to one side, even forget National Chocolate Cupcake Day (yes really, it was the 18th October) because Just Dance 2017 is out today. 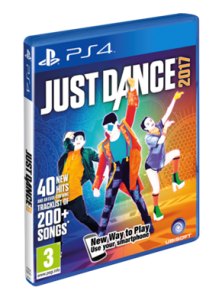 Just Dance Unlimited, the dance-on demand subscription streaming service, is also available for current-gen console owners and PC players. It offers more than 200 songs and access to exclusive tracks, while new hit songs are added all the time. The Standard version of Just Dance 2017 includes three months access to Just Dance Unlimited, so dancers can keep on moving.

Just Dance 2017 delivers fun, hip-moving tracks from chart-toppers to throwback favourites. With this year’s tracklist, everyone will find something to groove to, with jams like “Sorry” by Justin Bieber and “Lean On” by Major Lazer Ft. MØ & DJ Snake, brand-new hits like “Don’t Wanna Know” by Maroon 5, party favorites like “Single Ladies (Put a Ring on It) by Beyoncé and classics like “Don’t Stop Me Now” by Queen.