Little Mix storm straight to No.1 with #ShoutOutToMyEx 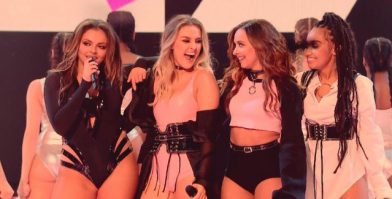 Little Mix this evening went straight to the top of the UK Singles Chart with their new smash hit Shout Out To My Ex.

The record, released on Sunday evening, replaced James Arthur at No1  – and, in so doing, gave Simon Cowell’s Syco Music No1 and No2 in the UK Singles Charts.

Shout Out To My Ex is Little Mix’s fourth UK No1 single. It is also only the third UK No1 single from a UK artist this year, after James Arthur and ZAYN, who also both first rose to fame on The X Factor UK.

Little Mix said: “Wow! We can’t believe that after only four days of sales we’ve managed to get to No.1! We can’t thank our fans enough! We’re over the moon! Our 4th No.1!”

In addition, Little Mix’s The Glory Days 2017 Tour went on sale today. Incredibly the girls have sold over 200,000 tickets in less that 10 hours, one year in advance! Six new Arena shows were added to the tour this afternoon, including two extra London O2 Arena dates.

The UK’s biggest all-girl group had premiered Shout Out To My Ex with a stunning world exclusive performance on The X Factor UK on Sunday evening in front of a TV audience of more than seven million.

Despite losing almost three days of the chart, the reaction to the record was so huge it toppled fellow Syco Music artist and another former X Factor winner, James Arthur, from the top of the charts.

Additionally, Shout Out To My Ex is also only the third single to go straight in at No1 this year, after Major Lazer’s Cold Water and ZAYN’s PILLOWTALK.

James Arthur had enjoyed three weeks at the top of the charts with his smash Say You Won’t Let Go. It now has total sales to date of 457,735 – and has now achieved gold status after just five weeks of release.

In addition, it also – staggeringly – becomes the 42nd UK No1 single from acts to have emerged from The X Factor UK, the ground-breaking Simon Cowell series which first launched in 2004 and is now in its 13th season.