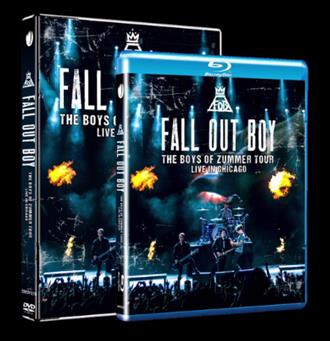 On October 21, Eagle Rock Entertainment will release The Boys Of Zummer Tour: Live In Chicago – the new live DVD, Blu-ray, and Digital release from multi-platinum selling rock band Fall Out Boy. Filmed on their latest tour which visited 39 cities in North America, the concert film captures the band’s celebratory homecoming show in Chicago. We have three copies to give away to our lucky readers. Details below!

Jam-packed with hits, Fall Out Boy – Patrick Stump, Pete Wentz, Joe Trohman, and Andy Hurley – deliver a storming 17-song set of favourites from across their career, including “Sugar, We’re Goin Down”, “Dance, Dance”, “This Ain’t A Scene, It’s An Arms Race”, “Thnks Fr Th Mmrs”, and “My Songs Know What You Did In The Dark (Light Em Up)”, along with “Centuries”, “Uma Thurman” and “Irresistible” – the newest hits from their latest platinum-certified #1 album “American Beauty/American Psycho”. Wiz Khalifa, who joined the band on The Boys Of Zummer Tour, performs with the band on “Uma Thurman.”

Throughout the set, Fall Out Boy are backed by video walls that deliver dynamic visual content, further enhancing the live experience. Presenting an audiovisual feast for the ravenous Chicago crowd, the band prove they’ve earned their place as one of today’s most sought after rock acts.

As a bonus, the DVD and Blu-ray are completed with three music videos: “Centuries,” “Irresistible,” and “Uma Thurman.”

We are giving away three copies of the DVD to our readers. The competition closes on Halloween, 31st October at Midnight, UK time. Good luck!