Totalling £187,571 for Stand Up To Cancer and prompting #StandUpwithYT to trending number 1 in the UK, the live-stream saw creators take on celebrities including The Vamps, Conor Maynard, Kimberly Wyatt and Diversity for all sorts of hilarious challenges. Exclusive performances from Aston Merrygold, Rag N Bone Man, The Beach, Diversity, Tor Miller and Una Healy topped off the fun-packed event. 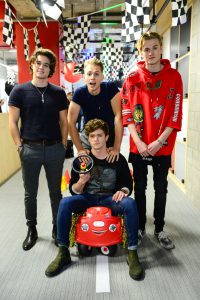 Hosted at YouTube’s London HQ, the ‘Stand Up To Cancer with YouTube’ live-stream made up the final four hours of 1,000 hours of fundraising which kicked-off last month to raise as much money as possible for Stand Up To Cancer, a joint national fundraising campaign from Cancer Research UK and Channel 4 to accelerate ground breaking cancer research.

The event – produced by Princess Productions, part of Endemol Shine Group, can be watched again atwww.youtube.com/standuptocanceruk.

Dan said: “It was an immense four hours and it’s been incredible to get together with all these talented and passionate creators to raise money for vital research. We are grateful to all of the fans for raising so much money for Stand Up To Cancer to help kick cancers butt!

Phil said: “We are just so glad to have been part of such an epic event to raise money for research that will save lives! 1 in 2 of us will be diagnosed with cancer in our lifetime, and the money we raise now will fund the heroic scientists who are working so hard every day to beat cancer. ”

Rachel Carr, head of Stand Up To Cancer, said: “What a colossal four hours its been and the perfect way to top off 1,000 hours of fundraising for Stand Up To Cancer with YouTube! We’ve laughed and cried and best of all we raised so much money that will fund research to crush cancer and save lives! It really is a mammoth achievement and we’re so grateful to all of the creators and celebrities who gave up their time to make it happen.”

Ben McOwen Wilson, YouTube’s Partnership Director in EMEA, said: “It’s been fantastic to see these YouTube stars and celebrities use their influence to inspire their millions of fans to help beat cancer. We’re thrilled to work with Stand Up To Cancer and use the positive power that these internet stars have – it surely is fundraising of the future!”

To find out more visit Standuptocancer.org.uk