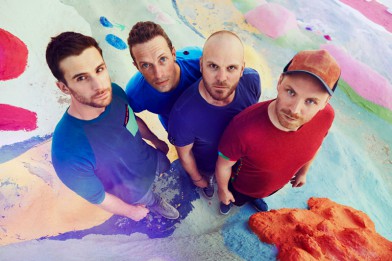 Coldplay have today revealed the video for A Head Full Of Dreams, the fourth single to be taken from their hit album of the same name.

The video was filmed in Mexico City during the band’s sold-out Latin American stadium tour in April. Directed by Marcus Haney and shot predominantly on Super 8mm film, it features the band cycling to their show at the city’s Foro Sol venue (where they set a new attendance record). The video begins with Charlie Chaplin’s speech from The Great Dictator, which also opens the band’s live show.

A Head Full Of Dreams is the opening track of Coldplay’s seventh album, which reached Number One on iTunes in more than 90 countries and has sold in excess of 4 million copies. The album remains in the UK Top Ten some 38 weeks after its December 2015 release and has helped Coldplay to maintain their position as the band with most worldwide listeners on Spotify throughout 2016.

The U.S. leg of Coldplay’s A Head Full Of Dreams tour resumes this weekend with two nights at LA’s Rose Bowl. The tour has already taken the band across Latin America and Europe, where they played four sold-out nights at London’s Wembley Stadium. More than two million tickets have already been sold for the tour, which has enjoyed rave reviews wherever it’s gone (“A stadium rock band at the top of their game,” as The Guardian put it). Further dates for 2017 are expected to be announced soon.

The videos for the album’s first three singles – Adventure Of A Lifetime, Hymn For The Weekend and Up&Up – have already been viewed a combined 955 million times on YouTube. They have also earned the band three nominations at the upcoming MTV VMAs in New York, for Best Rock Video (Adventure Of A Lifetime) plus Best Direction and Best Visual Effects (Up&Up).