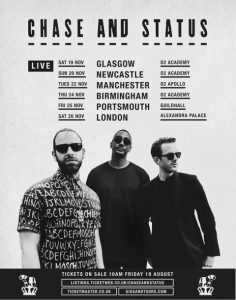 Described by Spin Magazine as “Nothing short of megastars”, Chase & Status are one of the most successful British bands of the past decade. ‘No More Idols’ – the follow-up to their ground-breaking critically acclaimed debut album, ‘More Than Alot’ – was the second best-selling UK album by a British band in the year of its release, spawned seven A list Radio 1 hit singles, and achieved double platinum status. Their third studio album, ‘Brand New Machine’ debuted at no. 2 in the album charts, and brought their career record sales tally to over 3.5 million.