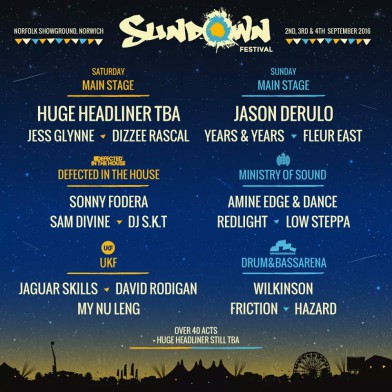 Delivering a mix of the most sought after names from all corners of the pop, urban and dance music landscape, Sundown brings together everything that is vital in music right now for an amazing live music experience. This year the festival expands even further adding a third stage and collaborating with some of the most revered brands in underground music.

In five years Jason Derulo has risen to one of the best-selling, radio-dominating pop and urban artists of the day, selling over 50 million singles worldwide and racking up over two billion views on YouTube and one billion plays on Spotify. Headlining on the Sunday, fans can expect a huge show featuring the likes of ‘Talk Dirty’, ‘Wiggle’, ‘Trumpets’, ‘Whatcha Say’ and many more. With one huge headliner still to be announced this promises to be the biggest year for Sundown yet.

With five UK number 1 singles to her name including her collaboration with Clean Bandit on huge Grammy Award winning hit ‘Rather Be’, Jess Glynne is one of the UK’s brightest stars. She will undoubtedly have the Sundown crowd singing along to a hit laden set whilst London hip hop and grime hero Dizzee Rascalwill bring his signature party sound to the Showground.

Years & Years were the big crossover success story of 2015 and their up- tempo brand of synth-pop spawned huge chart hits such as ‘King’ and ‘Desire’ and in Olly Alexander the band have a genuine, bona-fide pop star. Also performing will be Fleur East who has become a household name since competing on X-Factor and released one of the biggest tracks of 2015 in ‘Sax’.

A world famous name in house music Defected Records will host the second stage on the Saturday with renowned party starters Sam Devine, Sonny Fodera and DJ S.K.T. Get ready to raise those hands and party as one of the world’s most loved house music parties keeps the Sundown masses dancing all night long.

Undeniable masters of bass UKF are the Hosts for Stage 3 and proudly present a dual headline show featuring Jaguar Skills showcasing why he is the ultimate DJ ninja and the legendary David RodiganMBE bringing the sound of dancehall and reggae to the East Coast. Fast rising Black Butter up and comers My Nu Leng will keep it deep and on point.

Dance music royalty Ministry Of Sound will be presenting the second stage on the Sunday with heavy bass courtesy of French production duoAmine Edge and DANCE, genre blurring Bristolian and Lobster Boy head honcho Redlight and serious bass head Low Steppa all taking to the decks.

The legendary Drum and Bass Arena celebrate a huge 20 years in the game this year and will host chart topper Wilkinson whose anthem ‘Afterglow’ was an instant classic, Radio 1’s d&b don and Shogun Audio boss Friction and the classic jungle sounds of DJ Hazard.