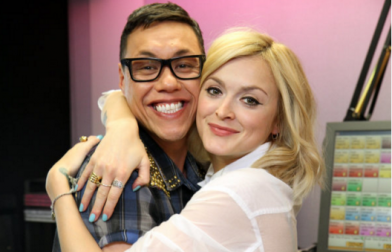 Best friends Fearne Cotton and Gok Wan delve into the world of celebrity style. Joining them in the studio each week, two celebrity panelists will be giving their opinion on who rocked the red carpet; who played it safe and who pushed the boundaries when it comes to the celebrity style stakes.

The series will also reveal the style secrets of our hosts and celebrity guests as they give a personal insight into dressing for those big events. Walk-in-wardrobes, high street heroes and last minute fittings for the ultimate designer dress – not to mention the hair, make-up, shoes and accessories that need to be considered during Awards season. The series will be following the highs and lows of celebrity fashion at the must-attend events; from the National Television Awards to the BAFTAs, the Grammys to the Brits.

Whether it’s looking at the biggest fashion news stories of the week or road testing some of the more ridiculous trends from the global runways, the emphasis is on fun, as Fearne and Gok celebrate the latest and greatest in the world of celebrity fashion.

Fearne & Gok: Off The Rails, a 6×60 minute series which will be produced by ITV Studios starts filming in January. The Executive Producer is Sumi Connock, with Sophie Waite as Series Producer. The series has been commissioned by Amanda Stavri, Commissioner for Entertainment, ITV and ITVBe.