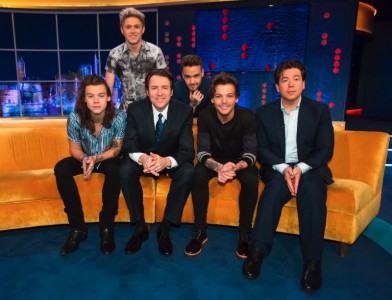 On this week’s episode of The Jonathan Ross Show, Jonathan is joined for a special interview by the world’s most famous boyband, One Direction. As well as speaking to Jonathan in a UK exclusive interview, Harry Styles, Niall Horan, Liam Payne and Louis Tomlinson also performed two smash hits, Perfect and Drag Me Down live in the studio. The boys are joined on the sofa by king of comedy, Michael McIntyre.

One Direction’s Harry, Louis, Niall and Liam spoke to Jonathan in their first UK sit down interview.

The boys spoke about life on the road and Harry spoke poignantly about feeling more at home on the road than when he is back in his hometown: “I don’t know if it’s so much longing for the other side, I know grass is always greener type thing but sometimes it’s more just a realisation that sometimes you realise you feel more comfortable on the road than you do at home. If you’re at home for a few days then you might be like, well for the last four years we’ve been moving so much you kinda don’t know what to do with yourself sometimes if you’re actually at home. So it’ll be nice just doing that for a while.”

When asked if they ever feel like they have missed out on normal life, Harry said: “I don’t think we’d change anything we all feel very lucky to have had this opportunity and I think if we sat and started thinking, ‘I wish we’d played more pubs or clubs’ it’d be a silly way of looking at it.”

The boys also spoke about what they miss about home when they are working all around the world.

Liam said, “having a fridge is actually a really good thing when you go home, having your own fridge with your own stuff in but there is room service the opposite side as well” whilst Louis admitted he likes to play football when he gets home. Niall admitted “a Sunday roast, even if it’s not a Sunday” and Harry said, “I think it’s probably sleeping in different beds, it’s nice when you’re at home for a while…” the audience laughed at Harry’s mix up with words about sleeping in different beds.

Liam spoke about singing karaoke when he was in America and Michael took this as his opportunity to sing for the boys in the hope of making it into the band. Bursting into a soulful rendition of ‘Ordinary People’ by John Legend, Michael then stood in front of the boys as if he was auditioning for The X Factor.

“I think when we were in the band, yeah probably, maybe that was me,” Louis said, “You know, I think we all kind of noticed that he wasn’t thoroughly enjoying it and we were and you know it can be an intense job at times and I think it got a little bit too much for him and he wanted to be in a different place and that’s fair enough and he’s got his own way now so fair dos.”

“Are you still close to him now, do you speak to him much?” Jonathan asked and Louis hesitated.

Asked when the last time Louis spoke to Zayn was, Louis said: “I don’t know a couple of weeks ago or something… I think he wants to distance himself a little bit.”

Jonathan talked about the boys announcement that they will be taking a break from performing and recording. “Is that an indefinite break? Is it a year and a half, two years?” Jonathan asked.

Harry replied: “I don’t know, I think we’ve got the album coming out and stuff and obviously we just finished the tour so we have a lot of work that we’re still focussing on and then I think the point of the break is that it’s going to be a break and we’re going to have some time off with no pressure.”

When asked about their plans for the break, Liam said the boys were thinking of planning a holiday: “We wanted to go on holiday but that’s never going to happen, we’re the least organised people ever!”

Louis joked, “well, Liam’s not coming apparently so it’s just us three” and Liam jumped in, “I am coming obviously, if there’s a holiday going [I’ll be up for it!] Where shall we go?”

Jonathan asked the boys, “What’s happening in your love lives at the moment? Who’s single, who’s mingled, who’s looking for a pringle? You’re all single aren’t you?”

The boys agreed, “we’re all single, yeah” with honorary bandmate, Michael piping up, “I’m married with two children!” They all laughed.

Jonathan asked Harry about the band’s most recent song, Perfect, and whether it was about his ex flame, Taylor Swift.

“Okay, I didn’t know that was the speculation. I’d say I think everyone writes from personal experience and I think you draw from lots of different things and songs aren’t always necessarily about what people may take them to be about, sometimes they are,” Harry said.

Louis added, “The point of that song is often when we do meet people it is quite hectic and it is quite chaotic so it was kind of putting that into a song.”

Speaking about their upcoming break from music, Jonathan said: “You are definitely going to come back aren’t you?”

THE JONATHAN ROSS SHOW, TOMORROW AT 10.40PM ON ITV