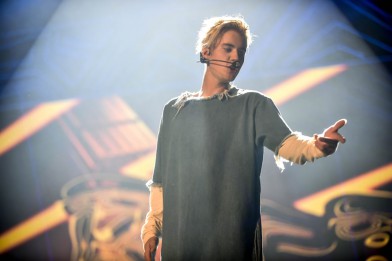 Pop superstar Justin Bieber surprised fans at this year’s Radio 1 Teen Awards when he took to the stage performing three of his hit singles.

The singer performed his chart topping hit ‘What Do You Mean?’ and top ten hit single ‘Where Are Ü Now’, both from his upcoming album Purpose. Bieber also performed hit single ‘Boyfriend’ from his 2012 album Believe.

The singer who recently appeared on Radio 1’s Breakfast Show with Nick Grimshaw, wowed  a crowd of 9,000 teenagers aged 14- 17  at the SSE Wembley Arena on Sunday, 8th November.

The star-studded event, held at the SSE Wembley Arena, saw The X Factor, The Hunger Games: Mockingjay Part 1, Ed Sheeran and Joe Sugg all winning awards in the celebrity categories, with One Direction scooping the most coveted award of the night for Best British Single for their track ‘Drag Me Down’.

The glitzy award ceremony, hosted by Radio 1 Breakfast Show host Nick Grimshaw and co-hosts Demi Lovato, Rita Ora, The Vamps and Troye Sivan, celebrated the achievements of three very special Teen Heroes – 14 year-old Alice, a carer from Gloucestershire, 14 year-old Rosie, a fundraiser with a highly malignant primary brain tumour from Coventry; and 16 year-old Aaren from Bristol who was born with gender dysphoria -each chosen for their incredible courage and exceptional achievements.

When taking to the stage to collect an award on behalf of One Direction, Radio 1’s Greg James announced that the band will be on Radio 1 this Thursday (12th November) to perform a very special Live Lounge.

The awards were voted for by Radio1’s listeners. This years’ full list of winners are: