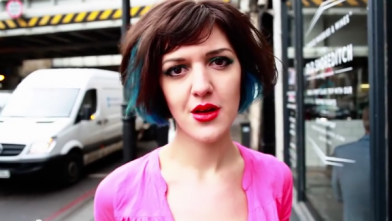 Emerging pop artist Jazz Mino is ready to drop her incredibly catchy new single ‘Blue Eyes’. Her debut single ‘The Dorkiness In You’ caught the attention of media and social media alike, to the point where she even played a private gig for Mayor of London, Boris Johnson, and other distinguished guests.

The single is accompanied by a creative music video that follows a comic book author manipulating and changing the lives of her comic book characters, which playfully visualises the emotions of the song: lust, infatuation & obsession.

Jazz Mino will be playing the ‘HowTheLightGetsIn’ festival in May, as well as following up the release of ‘Blue Eyes’ with two more singles, ‘Robots’ and ‘Paddy’, later this year!