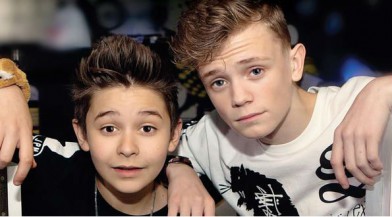 Bars & Melody visit HMV to sign copies of their new single ‘Stay Strong’. 500 wristbands for access to each event will be available on a first come first served basis, one per person in person only. Please check @hmvtweets for updates on when these will be available.

Leondre Devries (“Bars”) and Charlie Lenehan (“Melody”) release their eagerly anticipated new single ‘Stay Strong’, the follow up to their hugely successful 2014 single ‘Hopeful’. They took part in the eighth series of Britain’s Got Talent.

During their audition, they had automatically been entered into the semi-finals of Britain’s Got Talent after head judge Simon Cowell pressed the “golden buzzer”, a new feature introduced in the eighth series, and finished in third place. Leondre is from Port Talbot, Wales and Charlie is from Bristol but lives in Bournemouth.

Bars & Melody have already embarked on an extensive UK tour which will see them play O2 Academies in Liverpool, Sheffield and Leicester and Bournemouth’s Old Firestation the evening of their hmv signings.