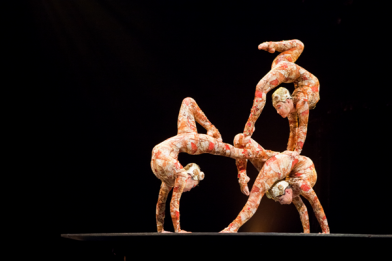 Cirque du Soleil’s final showing of KOOZA at the Royal Albert Hall is set to be a spectacle to behold. The show has returned to its origins for a dramatic performance – full of mystery, humour and exceptional performances from a unique cast of characters.

Surprises are in store for the audience throughout, as they follow the twists and turns in the journey of “The Innocent”; an outsider searching for his place. The Innocent stumbles upon acrobatic wonders and laugh-out-loud comedy from characters that include the King, the Trickster and the Obnoxious Tourist. KOOZA will end on a high on 19th February 2015 after weeks of outstanding reviews, which feature both the talented cast along with the intricate and wondrous scenery on stage.

To celebrate the success of KOOZA and its grand finale, What’s on Stage has teamed up with Club Med to give you the chance to win tickets to the final show, along with a luxurious dinner for two at Coda in London.

Club Med and Cirque du Soleil recently collaborated to produce “Creactive” an exciting new playground experience, featuring creative fun for all the family, and available at resorts across the world from 15th June 2015.

To have the chance to win, simply ENTER THE COMPETITION HERE by answering a quick question on the WhatsOnStage website by 5pm on Tuesday 10 February.