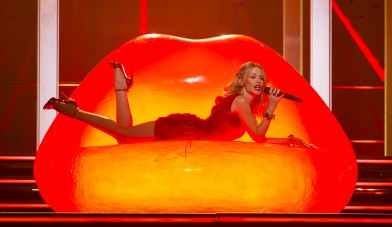 The Jockey Club Live presents ‘An Evening At The Races’ returns with a bang for 2015, announcing today that global superstar Kylie and indie rockers Kaiser Chiefs are the first acts to join their 2015 season.

At home in some of the world’s biggest and best arenas, Kylie is renowned for her spectacular live shows. She celebrated her first UK number #1 in 1987 with ‘I Should Be So Lucky’, clocking up massive chart hits including ‘Spinning Around’ and ‘Can’t Get You Out Of My Head’. Kylie has now been at the forefront of pop culture for 28 years, selling over 70million records worldwide and releasing her 12th studio album ‘Kiss Me Once’ last year. With her incredible back catalogue, featuring 44 UK Top 40 hits, Kylie will be playing her classic hits old and new when she brings glamour to the Grandstands.

Kylie said: “I’m so excited to be performing at ‘An Evening At The Races’. I have an amazing band and fabulous dancers and we can’t wait to share my hits with you in a beautiful Summer outdoor show. Being from a horse racing city like Melbourne, I’ll be sure to have a flutter on the horses myself!”

Joining Kylie as a headliner on the ‘An Evening at the Races’ series is Brit Award-winning, multimillion selling Kaiser Chiefs, lead by BBC1’s ‘The Voice’ coach Ricky Wilson. The band first shot to recognition in 2005 for breakout hit ‘I Predict A Riot’, followed by hits including ‘Oh My God’, ‘Everyday I Love You Less and Less’ and 2007’s #1 ‘Ruby’. They released their latest LP, ‘Education, Education, Education & War’ last year, smashing into the #1 spot on the UK album chart on release. The record became their second #1 long play, following 2007’s ‘Yours Truly Angry Mob’ and became their fifth top 10 album.

‘An Evening At The Races’ offers a value for money experience unlike any other this summer. Alongside incredible headlining performances by the likes of Kylie and Kaiser Chiefs, the action kicks off earlier in the evening with 6 races – giving fans the chance to witness up close powerful equine athletes who are stars in their own right, and enjoy the thrilling drama and spectacle of them racing for glory. Whether you fancy a flutter or a dance with friends and family the event is certain to be an odds on favourite for all, with tickets starting at only £25.

Tickets will be on sale at 9am 6th February via http://www.thejockeyclublive.co.uk. Tickets are priced starting from £25 however vary per racecourse and event, with child tickets also available. Please visit The Jockey Club Live website for full ticket details, hospitality packages to suit all budgets, plus T&C’s.