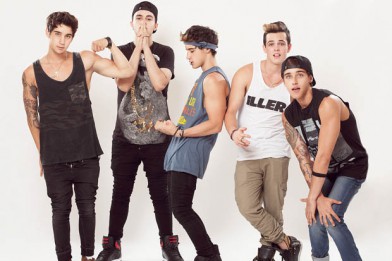 Melbourne-born masters of ‘social disturbance’ and new punk mischief makers, The Janoskians, are taking over The SSE Arena, Wembley on March 21. You can hear about it from them below:

Following the success of their second sold-out worldwide ‘Got Cake’ tour last year, the boys will embark on a huge date at London’s Wembley Arena. There will be a 48 hour pre-sale starting now on http://po.st/Janofest. Tickets will go on sale to the public January 30, 2015 at 9am via www.livenation.co.uk

With pandemonium and fanfare growing exponentially worldwide, The Janoskians have joined forces with Lionsgate for the development and future release of a feature length film based on their one-of-a-kind brand of “social disturbance comedy”.

The film, helmed by Danny Lee [Road to Brooklyn, Detroit Rubber] and penned by comedian Dan Ahdoot [Super Fun Night, Your Pretty Face Is Going to Hell, Kickin’ It], will encompass a partially-scripted comedy packed with stunts, public pranks, wish-fulfillment and hilarity as we follow the Janoskians adjusting to life in Los Angeles and vowing to throw the most epic party of all time.

And with their record deal with Republic Records, new music is only round the corner!

For the unfamiliar, in 2011, Janoskians mayhem started brewing when the group uploaded their first ‘Awkward Train Situations’ video to YouTube. As the fan base grew, they continually released hilarious and disruptive content, gaining over 1.79 million YouTube subscribers and counting as well as accruing more than 137 million combined views.

A meet and greet in London’s Hyde Park drew a mob of approximately ten thousand fans, forcing the boys to evacuate. You can see it here – https://www.youtube.com/watch?v=TS9oOButf6Y .They later shut down the world renowned Beverly Center in L.A. as thousands of girls flooded the mall. Meanwhile, an appearance in Times Square in February 2014 drew 20,000 fans.