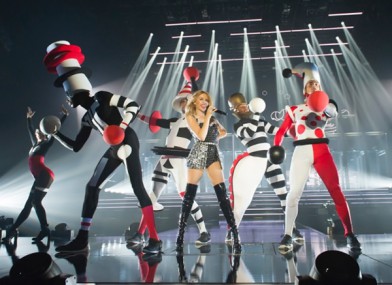 The universally adored Kylie is unquestionably one of the top pop entertainers on the planet, famed for her fabulous and extravagant live shows. She took her awesome Kiss Me Once tour around Europe last year, featuring glittering renditions of her heart thumping greatest hits.

And she is once again causing palpitations on her latest collaboration with disco legend Giorgio Moroder. ‘Right Here, Right Now’ the first track to be released from his forthcoming album.

Kylie comments: “I’m so excited to perform at Hyde Park this Summer. I have great memories of playing shows there and am looking forward to doing it all again! Given the amazing artists performing and that it will be the longest day of the year, I can’t wait!”

The Australian pop siren has sold over 70 million records worldwide in a career spanning over 25 years, boasting the kind of success and longevity most performers only dream of.

Kylie has clocked up 33 UK Top 10 singles, including seven #1 hits including ‘I Should Be So Lucky’, ‘Spinning Around’, ‘Can’t Get You Out of My Head’ and ‘All The Lovers.’

Also taking to the stage on Sunday June 21st and performing live for the first time in 2015, will be the one and only Grace Jones. Since releasing her first single ‘I Need A Man’ in 1975, Grace has become one of music’s singular icons, known as much for her incredible outfits, on stage hula-hooping and larger than life character as she is for her ground-breaking club hits ‘Pull Up To The Bumper’, ‘Slave To The Rhythm’ and ‘Nightclubbing’. When Grace is around, anything can happen.

And returning to Hyde Park are Chic feat Nile Rodgers. Back by popular demand, after a now legendary mid afternoon set at the inaugural Barclaycard presents British Summer Time Hyde Park in 2013, Nile and his band will once more be whipping the crowd into shape (and on to the stage!) with the hits that invented disco – ‘Everybody Dance’, ‘Good Times’, ‘We Are Family’ and ‘He’s The Greatest Dancer’.

Other headliners already announced for Barclaycard presents British Summer Time Hyde Park are Taylor Swift, joined by Ellie Goulding and John Newman on June 27th and The Who, with Paul Weller, Kaiser Chiefs and Johnny Marr on June 26th.