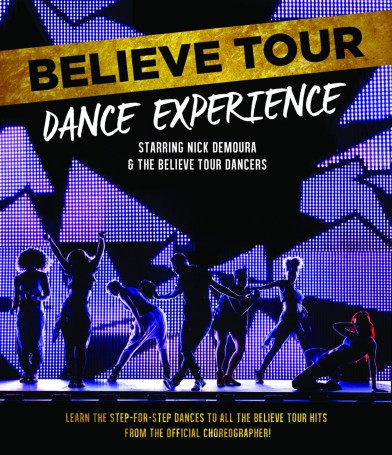 Want to move like Bieber? Believe Tour Dance Experience will help you do just that; the video, led by Justin’s choreographer and creative director Nick DeMoura, features the multi-platinum superstar’s hottest moves from his record-breaking Believe tour.

The video will teach fans Justin’s original routines, set to his accompanying hits included in the package. Believe Tour Dance Experience drops on August 12th via Def Jam/UME, and will be available on DVD and Blu-Ray as well as via all digital retailers. Promotional partners for the video include heavyweights Adidas and Beats Music.

Elsewhere, catch Justin and Nick DeMoura as guest judges on the new season of Fox’s smash TV show, So You Think You Can Dance. DeMoura rose to prominence as the choreographer for the hit films Step Up 3D, Prom Night, and Dance Flick. Additionally, he served as creative director on Justin Bieber’s Believe tour and appeared in the accompanying tour documentary. DeMoura also contributed to the Harmonix video game Dance Central 2.

“Dance is a universal language,” says DeMoura, running through the steps to Bieber hits such as “Beauty and the Beat,” “As Long As You Love Me,” and “Boyfriend.” “All it takes is a lot of hard work and training.” Fans will discover that it’s not just the steps, but the energy and attitude that make the dancer. Given its inspirational component, Believe Tour Dance Experience makes for the ideal instructional fitness video.