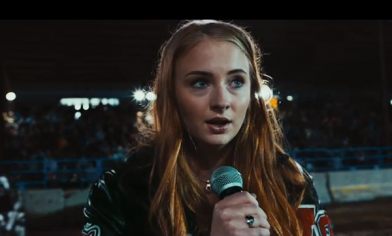 Led by a haunting piano melody overlaid with Dan’s emotive vocals, the track progresses to unveil ghostly harmonies and distorted 808 beats as it builds towards a stunning cello-led outro. Representing a moment of introspection within the album – as the song’s protagonist reflects on hedonism with a passed-out friend – “Oblivion” marks contrast to the rhythm-led sounds of tracks like Pompeii, Flaws and Bad Blood.

The cinematic video for the track stars luminary actress Sophie Turner who plays Sansa Stark, one of the principle characters in the HBO global phenomenon TV Series Game of Thrones.

Directed by Austin Peters, who also helmed the videos for Flaws and Laura Palmer, the narrative is the final denouement in a series of short stories encapsulated across the rest of the band’s “Bad Blood” videos. In fact, if fans look closely, they may recognize the jacket worn by Sophie having featured in both Bad Blood and Flaws.

2014 continues to be a landmark year for Bastille. Earlier this month single Pompeii was named the most streamed song ever in the UK and in the U.S it was declared the biggest selling rock song of the year with over 2.5 million sales. Album Bad Blood has been certified the biggest selling rock album in the U.S this year with nearly 1 million sales whilst worldwide sales have reached an incredible 3 million.

Having already sold out two consecutive headline tours in the US, the band have just announced their third North American tour which will see them play 23 mini-arena dates throughout the autumn. In the UK and Europe they’ve played prolific slots to huge crowds at many of this summer’s festivals and they will appear at Boardmasters and V festival in August for their final UK shows this year.