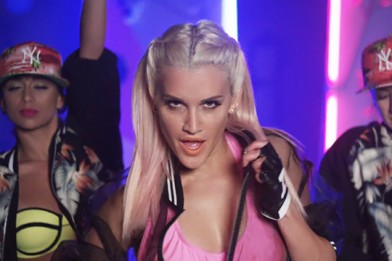 After splitting from pop girl group, Pussycat Dolls, in 2010, Ashley Roberts has gone onto to feature in many major reality TV series such as ‘I’m a Celebrity Get Me Out Of Here’, ‘Ant & Dec’s Saturday Night Takeaway’ and judge for ‘Dancing on Ice’. Since then the multi-talented American singer/ dancer has been working hard on her own solo career which hit off in November 2012 when she released her first official solo track, ‘Yesterday’. From this, she debuted her official single, ‘Clockwork’ in May 2014, which is now followed by the explosive and sanguine second single, ‘Woman Up’; featuring on her debut solo album, ‘Butterfly Effect’ is available for pre-order now, to be released on September 1st.

‘Woman Up’ is a track vastly different to Ashley’s previous singles. ‘Yesterday’ is a song which is more disconsolate than anything but by no means any less enrapturing, whilst ‘Clockwork’, despite being a track based more on the same terms of heart-break and melancholia, is far less dejected than ‘Yesterday’, rather it’s consistently rousing and lively. The latest single is a song of its own, espousing a pop/R&B genre that is thrilling and anthemic. Beginning with an intro similar to the power of Survivor song, ‘Eye of the Tiger’,

‘Woman Up’ culminates the attitude of Ariana Grande’s track ‘Problem’ with sass and a sense of female authority similar to the songs produced by artists like Beyoncé. Unlike Beyoncé however, Ashley focuses explicitly on a pop genre. What’s possibly the hardest thing to explore with this song is the similarities shared between Ashley and other female artists. Of course, the pop songs recorded by female soloists share a very similar theme based around the aforementioned heartbreak or an as an expression of asserting the sexuality of the female body, as is seen in many of these music videos, Ashley’s included. So you’d think that the concept of voice would be similar also. You’d be wrong. Ashley’s voice is quirky and unique, a tone for which she embraces with especial enthusiasm. What’s more, the choice of lyrics and way in which Ashley sings with such liberation makes the song considerably empowering to women.

Whilst it’s catchy and tuneful, the track is very heavily centred on a pop genre, something which certainly doesn’t appeal to everyone. It is also probably one of the most controversial genres to like because of how divided public opinion is towards it. What’s more, this is a dance song so whilst I see it as a rocking tune ideal for party scenes, it would be pushing it to say that this is a club song.

Even if the song isn’t to everyone’s taste, the video can still attest to the hard work that has been put into creating the track. This is a video that is structurally well edited. From the quick cuts to the variety of skilled edits such as track shots, tilts and zoom, this video has been made to be fast-paced, demanding and erratic, as a reflection of the music.

The basis of this video is women uniting and Ashley certainly fulfils that, not just in the stylised group dances but even with the feature of Kimberly Wyatt, who is included to show that old ties still lay entrusted among one another. Most conventionally, pop/R&B videos for female soloists involve them busting out moves in rooms generally where there is low key lighting. Fifth Harmony for example, demonstrate the similar street moves applied by Ashley, giving the video an edgy feel. In a way this puts across the nature of Ashley’s R&B style, however it’s evident she still holds onto the pop genre through how many close up shots are used to single her out, just like videos for Christina Aguilera that focus on sexuality which in many ways, Ashley establishes.

Admittedly at first I listened to the track with caution and disfavour. But the more and more I played it, it gradually grew on me and in all honesty this is not a bad track, albeit with a powerful pop sound that can be unfavourable to most. It goes to say the same for the video. At first I thought the bright clothes and colourful lights made it a little tacky but the more I thought about it, this video clearly had lots of effort put into constructing it to make it as good as it could be. This is a song with subtext and I think that’s why it was a track I found displeasing at first, because I didn’t know what to make of it. I would definitely recommend having a listen to this, not just once but several times, you don’t want overlook the track as I first did.