WATCH: Ella Eyre defies gravity in debut music video for ‘If I Go’ 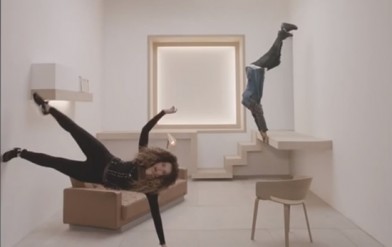 Ella Eyre’s debut single ‘If I Go’ was released on 13 July 2014 and the music video has already had nearly a million views on YouTube.

The music video for If I Go shows Ella and two dancers performing on all four faces of a room, moving seamlessly from floor to walls to ceiling. I’m getting in touch with a behind-the-scenes story about how award-winning physical special effects company Artem helped Ella to defy gravity.

The ‘impossible’ effect was achieved by placing the artists in a set constructed within a unique machine designed and built by Artem. The machine, known as a ‘rollover rig’, is capable of rotating a set through 360 degrees up to a maximum speed of one revolution in 12 seconds. As the camera rotates with the room, the occupants seem to defy gravity as they move around.

Artem combines the best of engineering expertise with creative flair to provide everything from puppetry to props and pyrotechnics to animatronics. In 2012 Artem also helped to bring to life the enormous creative and logistical vision of the opening and closing ceremonies of the Olympics and Paralympics.