New pop-rock act Young Brando are supporting McBusted on 34 UK arena tour dates so we thought it was about time to catch up with the lads and find out more about them.

Hi guys, some of our readers may not have heard of you previously, if you had to introduce yourselves in one sentence, what would it be?

Tom: We are 5 males who like to play rock music that makes people happy, then sad and then happy again.

What inspired you to get into Music? / How did you guys form as a band?
Rich: Salisbury has a pretty uniquely vibrant music scene for a city of this size. It just seemed like if you weren’t playing music, you were doing the wrong thing. And, you’ve always gotta do the right thing!

Who do you look up to musically?
Russ: Dave Grohl for me, and I know Drew is the same because he always moans at me for nicking his answer. For Drew it’s more about what he does behind a drum kit, and for me it’s more about how he captivates his audience. No matter how many thousands of people he has in front of him, he has every single one of them in the palm of his hand. Basically he’s just GREAT and when this goes online you should probably change the original question to “please can you kiss Dave Grohl’s ass here?”.

How did you react when you found out you were touring with McBusted?
Abe: Very slloooowwwllyy…

(You can see exactly what Abe means below)

Would you say McBusted were major influences to you prior to finding out you were touring with them?
Russ: We actually played our first show with Mcfly, as part of a charity festival called Music on The Hill, and you can’t help but be influenced by a band like that. They are a brilliant live act, and I don’t think they get the full credit they deserve for it. We’re really looking forward to seeing the Mcfly-Busted combination too, it’s going to be one hell of a show.

If people are coming to see the McBusted tour, what can they expect from your set?
Russ: Energy, sweat, and noise. It’s going to be a lot of fun.

What would you love to achieve above all else in your music career?
Tom: I suppose above all else I would just like to get the the point where I can support myself doing what I love for as long as possible. It would also be pretty great if we ever got the chance to play the main stage at Reading festival as I have lost count of the amount of times I have stood in that audience wishing I was up there in one of the bands. 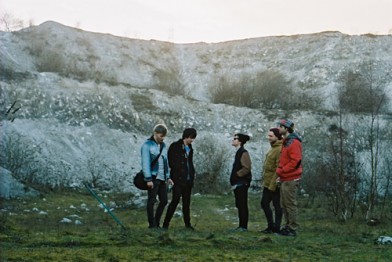