New The Saturdays Single – ‘Not Giving Up’ out 6th April 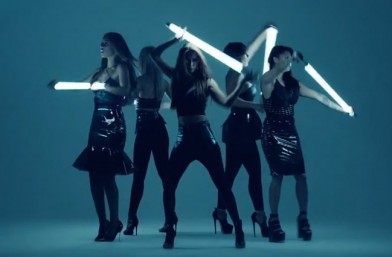 The Saturdays are set to storm back into the charts with their new dance/pop single ‘Not Giving Up’ out 6th April.

‘Not Giving Up’ is the seventeenth single release from The Saturdays and follows up a massive year where the girl band scored their first number one single ‘What About Us’ featuring Sean Paul from their fourth top ten album ‘Living For The Weekend’.

Produced by the hugely talented Swedish pop genius Carl Ryden (David Guetta), the up-tempo club banger is made for some serious moves on the dance floor with an absolute belter of a chorus. ‘Not Giving Up’ is a pure dance-pop pleasure.

Band member Frankie Sandford calls the track “an absolute stormer” while Mollie King adds that “it’s the track our fans haven’t stopped talking about since it debuted on our E! Network series Chasing The Saturdays and seems to be everyone’s favourite track on the album”. Una Foden mentions “the video shoot was so much fun. It’s our most futuristic and fashion forward video yet and we can’t wait for everyone to see it”.

The Saturdays have been on an incredible winning streak since they first debuted in 2008. They have sold over 5 million records and scored 4 top ten albums and 13 top ten singles, plus over 30 million video views combined.. Between them, the girls have over 1.5 million fans on Facebook and 4.7 million on Twitter.

The Saturdays are currently putting together plans for a UK tour later this year. News of dates will be announced soon.