We’re at it again here at Pop Scoop! In this latest competition we are giving ONE lucky fan the opportunity to WIN this priceless one-of-a-kind signed sketch by boyband M.AD.

And the winner of a signed sketch by boyband M.AD. is…. 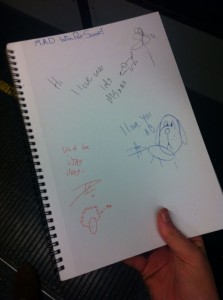 RT: I followed @pop_scoop to be in with a chance to WIN a signed M.A.D doodle. http://bit.ly/NE6diC #MADPopScoop

You can enter more than once but please respect your followers and refrain from flooding their streams.

• There is ONE prize (the “Prize”) on offer consisting of a signed M.A.D doodle.