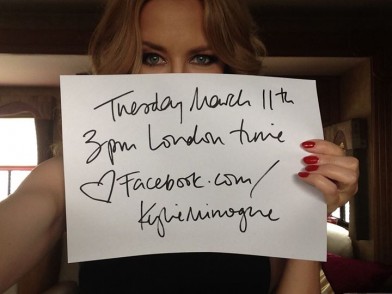 Pop princess, Kylie Minogue, will give fans an exclusive preview of tracks from her much anticipated new album at an event streamed live on Facebook on Tuesday 11th March at 3pm GMT. Kylie made the special announcement via a special photo message to her 2.2 million fans.

During the hour-long event Kylie will discuss her new album Kiss Me Once, which is released on 17th March, and reveal exclusive samples of her new tracks. A limited number of tickets for fans to attend the exclusive event in person are up for grabs via Kylie’s Facebook page, https://www.facebook.com/kylieminogue, so be quick!

Kylie will challenge lucky fans at the event to recreate her album cover in a live competition, and the winner will receive a signed copy of the recreated album cover

Kylie Minogue said: “Taking part in this event on Facebook gives me the opportunity to speak directly to my fans from all over the world. I can’t wait to give fans a sneak peak of some of the new tracks from my album, answer their questions and meet some of them on the day.”

Glenn Miller from Facebook, said: “We are honoured to be working with Kylie around the launch of her new album. This live event shows one of the many ways musicians can use Facebook to connect with millions of fans in new and engaging ways. Kylie continues to be at the forefront of entertainment as she brings together her fans from all over the world to ask questions and hear some of the tracks from her new album for the first time.”

For those who aren’t lucky enough to win tickets, you can watch Kylie in action from 3pm GMT next Tuesday 11th March.

Pre-order Kiss Me Once here: