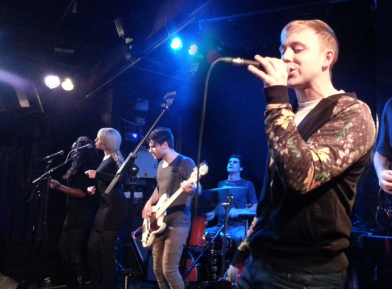 “I’ll let my haters talk, they ‘aint got what I got” Enter rising singer/songwriter John Galea and his arsenal of expertly-constructed, gritty electro-pop tunes. Be prepared to talk, but as lovers!

A classically-trained pianist, Norfolk-born John concentrated on the craft of songwriting from an early age. He won a national award for his talent and began working with writers and producers at J.R. Rotem’s famed L.A.-based Beluga Heights label (Rihanna, Britney, Leona Lewis, Jason Derulo). After setting up his own songwriting company The Works, John (and co-writer Dean Muscat) charted a #1 hit in Malta with “Frontline” as recorded by singer Thea Garrett.

John dropped his first solo EP “The Scrapbook” in 2012, featuring R&B/grime-tinged synth-pop tracks “Do It My Way” and “Drunk On U”, and went on to support both Lemar and McFly on their UK tours. Collaborating with Grammy-nominated production team The Monarch (Rita Ora, Cher Lloyd, Justin Bieber, Chris Brown), he released his deeply-personal second EP “Under Attack” in 2013, including club roof-raiser “Golddiggin” (feat. Scorcher) and newest single “Ammunition”, a melancholy yet ubercatchy ballad.

Currently hard at work in the studio on his third EP and with upcoming UK gigs and appearances on the summer festival circuit planned, 2014 is set to be a busy year for John. Keep him in your sights, we expect “galleons” of future fans!

Pop Scoop! sat down to have an in-depth conversation with John right before his recent set at Norwich Waterfront (his first headline gig on home turf). He spoke about his distinctive and developing sound, what first got him into music and performing, his interest in songwriting structure, the challenges inherent in writing for other artists as well as himself, and who he would love to collaborate with in the future. In addition, John faced our Quick-Fire Biographical Trivia Questions – with some surprising results!