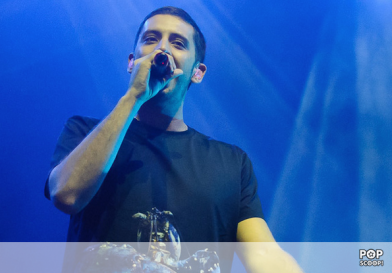 Renowned for his monstrous live sets at huge venues and the world’s biggest festivals, Example has a unique ability to transform dance floors into colossal party scenes in a matter of seconds. Last year saw Example sell out a mammoth UK arena tour alongside headline festival appearances at the likes of Global Gathering and SW4 plus co-headline sets at Glastonbury, Rockness and Parklife. In 2014, Example is hitting the road again, armed and ready to bring the roof down in some of the UKs more intimate venues – 6 gigs, 3 cities, 1 weekend.

The Ultimate Weekender Tour see’s Example take it back to his roots. Bringing the party to smaller, more intimate venues than the usual vast arena’s his fans are used to, Example is ready to shatter the dance floors of six of the UK’s best venues in London, Manchester and Glasgow. Not content with performing his electrifying live set to fans, Example will immediately hotfoot it from the stage across town to host an after-party at a neighbouring venue to perform his infamous Ibiza show alongside DJ Wire and other special guest DJ’s into the early hours.

Support on the Ultimate Weekend Tour comes from the incredible 21-year-old Tampa Bay rapper, Dominique Young Unique. Dominque’s debut single ‘Throw It Down’ (released 6th April through Epic Records), sees her team up with hitmaker DJ Fresh, Benga and The Invisible Men, the result being an explosive concoction of tribal beats, an atomic bass line and razor sharp flows.

Applications for the chance to purchase tickets to the Ultimate Weekender Tour open on Example’s official site (http://www.trythisforexample.com/) at 8am Friday 31st January, closing at 10am Tuesday 4th February. Successful applicants will be notified on the 4th February and sent further information on how to purchase tickets.