Everyone’s favourite breakout band of 2013 are back with more infectious indie-pop perfection, in the form of their latest single ‘Settle Down’, taken from their debut self titled album.

Allegedly inspired by lead singer Matt Healy’s obsession with Michael Jackson, ‘Settle Down’ kicks off straight away with the catchy drum beat and energetic guitar riffs which have become somewhat of a trademark for The 1975.

Because of these elements, you’d be forgiven for thinking that the intro to this track sounds incredibly similar to that of ‘Chocolate’. At risk of sounding a lot like my parents, the instrumentation of nearly all of the singles The 1975 have released to date sound very similar to each other, and this track is no exception. I feel like this is for a good reason though, that they’re happy with the sound they’ve created and want to stay in their comfort zone. If ‘Chocolate’ were to be rearranged a bit and a different chorus chucked in, you’d get ‘Settle Down’.

Matt Healy’s gorgeously charismatic vocals are what allow the track to be interesting, with the lyrics to ‘Settle Down’ being incredibly endearing. You get the impression that the lyrics describe an underlying yearning, almost a need for something more. The first line of the chorus ‘For crying out loud! Settle down’, sounds almost desperate and vulnerable, but in an extremely beautiful way.

If you’re already a fan of The 1975, chances are you will love this, however if you’re yet to be converted, this might not do the trick. There’s no doubt that ‘Settle Down’ showcases The 1975’s youthful, energetic sound that they do so well, but I can’t help but want something more from them. Or is that the whole point of this track?

Rest assured that much like every other song you’ve heard by The 1975, you will have this catchy beauty in your head for days. 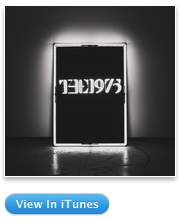